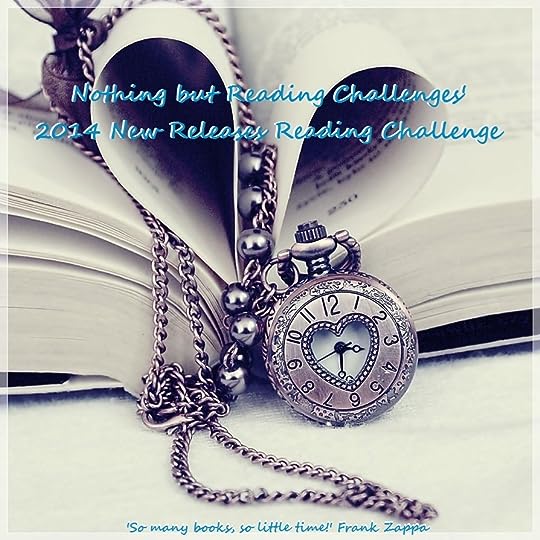 This challenge will have a threefold purpose--Firstly, we'll be able to keep track of what is coming out. Secondly, we'll be able to see if anyone else is reading what we are and create discussion threads for books for buddy reads or open discussions that are more relaxed. Lastly, it could also help us figure out what to nominate for certain months because some books you just can't wait months to read.

Set a goal for the year. You don't necessarily have to read a book in it's assigned month for it to count. The goal is to see how many books you can read that were published within said year. It'll be fun to see how many new releases we all truly read without even realizing it in one year.

• January 2
The Sacrificial Man: A Thriller by Ruth Dugdall

• January 7
After Shock: A Novella (Lucy Guardino FBI Thrillers) by C.J. Lyons
After the Storm (KGI #8) by Maya Banks
Alliance: The Paladin Prophecy #2 by Mark Frost
The Almost Girl by Amalie Howard
Brainstorm: The Power and Purpose of the Teenage Brain by Daniel J. Siegel MD
Cursed By Destiny: A Weird Girls Novel by Cecy Robson
The Dancing Master by Julie Klassen
Dark Wolf (Carpathian #25) by Christine Feehan
Death of a Chocoholic by Lee Hollis
Defy by Sara B. Larson
Delivering Death by Julie Kramer
Douglas: Lord of Heartache (The Lonely Lords) by Grace Burrowes
Eggs in a Casket (Cackleberry Club #5) by Laura Childs
Fear Nothing: A Detective D.D. Warren Novel (D. D. Warren) by Lisa Gardner
The Ghoul Next Door (Ghost Hunter Mystery Series #8) by Victoria Laurie
Home of the Braised (White House Chef Mystery Series #7) by Julie Hyzy
Huckleberry Hill by Jennifer Beckstrand
In the Blood by Lisa Unger
The Invention of Wings: A Novel by Sue Monk Kidd
A Miracle of Hope (The Amish Wonders Series) by Ruth Reid (paperback edition)
Mrs. Lincoln's Rival by Jennifer Chiaverini
No One to Trust (Hidden Identity) (paperback edition)
by Lynette Eason
Once Upon a Winter's Heart by Melody Carlson
Out of the Woods: A Memoir of Wayfinding by Lynn Darling
A Promise Kept by Robin Lee Hatcher
Return to Tradd Street by Karen White
River of Dreams (Nine Kingdoms #8) by Lynn Kurland
River Road by Jayne Ann Krentz
Standup Guy (Stone Barrington) by Stuart Woods
Suspect by Robert Crais
Time and Again by Jack Finney
The Way of All Fish by Martha Grimes

• January 7
In Dreams by Erica Orloff

• January 28
Crimson Veil (Sisters of the Moon Series #15) by Yasmine Galenorn
Cruel Beauty by Rosamund Hodge
Home to Seaview Key by Sherryl Woods
Into the Still Blue (Under the Never Sky) by Veronica Rossi
Mail-Order Brides of the West: Lina (Montana Sky Series) by Debra Holland
Manor of Secrets by Katherine Longshore
Minding Molly (The Courtships of Lancaster County #3) Leslie Gould
The Orphan Choir by Sophie Hannah
Reaper's Legacy by Joanna Wylde
Romancing the Duke: Castles Ever After by Tessa Dare
The Silence of the Library (Cat in the Stacks Series #5) by Miranda James
Silence Once Begun by Jesse Ball
Uninvited by Sophie Jordan
Unseen (Will Trent Series #8) by Karin Slaughter
Up From the Grave: A Night Huntress Novel by Jeaniene Frost
Wildwood Creek by Lisa Wingate

Dates have been verified.

• October 2
The Perfectionists by Sara Shepard

• October 7
Black Ice by Becca Fitzpatrick
The Blood of Olympus by Rick Riordan
Broken by Laura Wright
Broken Soul by Faith Hunter
Burying Water by K.A. Tucker
Dead But Not Forgotten by Charlaine Harris
Deadline by John Sandford
A Demon Summer by G.M. Malliet
Echoes of Scotland Street by Samantha Young
Endgame: The Calling by James Frey & Nils Johnson-Shelton
Exquisite Captive by Heather Demetrios
The Fall by Bethany Griffin
Final Lap by Erin McCarthy
Ghost Wanted by Carolyn Hart
Immortal by J.R. Ward
Mr. Miracle: A Christmas Novel by Debbie Macomber
Not in the Script by Amy Finnegan
Picked to Die by Sheila Connolly
A Place Called Harmony by Jodi Thomas
Ruining Mr. Perfect by Marie Harte
Rules For A Proper Governess by Jennifer Ashley
Some Luck by Jane Smiley
Stirring Up Trouble by Kimberly Kincaid
The Shell Game by Janet Evanovich
The Sweet Surrender of Janet Buchanan by Paula Quinn
Tied by Emma Chase
Undead and Unwary by MaryJanice Davidson
The Young Elites by Marie Lu

• October 14
The Counterfeit Heiress by Tasha Alexander
The Cure for Dreaming by Cat Winters
Darling Beast by Elizabeth Hoyt
Leaving Time by Jodi Picoult
Living with Regret by Lisa De Jong
Mortal Gods by Kendare Blake
Neil Patrick Harris: Choose Your Own Autobiography by Neil Patrick Harris
On the Naughty List by Lori Foster et al.
One in a Million by Jill Shalvis
Redeemed by P.C. Cast
Snow Like Ashes by Sara Raasch
They All Fall Down by Roxanne St. Claire
Trust Me, I'm Lying by Mary Elizabeth Summer
Undivided by Neal Shusterman
Until the End by Abbi Glines
Winter Street by Elin Hilderbrand

• October 15
I Love How You Love Me by Bella Andre

• October 28
The Accidental Countess by Valerie Bowman
All Broke Down by Cora Carmack
Archangel's Shadows by Nalini Singh
Atlantia by Ally Condie
Blood Magick by Nora Roberts
The Book of Strange New Things by Michel Faber
Burn for Me by Ilona Andrews
By Winter's Light by Stephanie Laurens
Catalyst by S.J. Kincaid
Christmas at Twilight by Lori Wilde
The Escape by Mary Balogh
Eternal by C.C. Hunter
Hearts Untamed by Nora Roberts
In the Afterlight by Alexandra Bracken
Prince Lestat by Anne Rice
The Shocking Secret of a Guest at the Wedding by Victoria Alexander
The Slow Regard of Silent Things by Patrick Rothfuss
The Snake by Michael Grant
Talon by Julie Kagawa
A Virtuous Death by Christine Trent
The Wicked Ways of Alexander Kidd by Paula Quinn
The Wolf in Winter by John Connolly
The World of Ice and Fire by George R.R. Martin
Yes Please by Amy Poehler

More titles can be found here.


Dates need to be verified.

• November 6
Always Been You by Beverley Kendall
For Now by Chelsea M. Cameron
Hope to Die by James Patterson

• November 11
Blue Labyrinth by Douglas Preston, Lincoln Child
Flesh and Blood by Patricia Cornwell
Illusion by J.S. Cooper
More to Give by Terri Osburn
Revival by Stephen King
Stone Cove Island by Suzanne Myers
The Bane Chronicles by Cassandra Clare et al.
The Color of the Season by Julianne MacLean
The Laws of Murder by Charles Finch

• November 18
A Last Chance Christmas by Vicki Lewis Thompson
A Royal Christmas Proposal by Leanne Banks
Ella and Micha: Infinitely and Always by Jessica Sorensen
For the Record by K.A. Linde
Hart Attack by Cristin Harber
Holiday on Ice by Jaci Burton
Stolen by Melissa de la Cruz
The Escape by David Baldacci
The Job by Janet Evanovich & Lee Goldberg
The Void by J.D. Horn

• November 25
Betrayed by Lisa Scottoline
Black Widow by Jennifer Estep
Broken Open by Lauren Dane
Captive by Aimee Carter
Deadly Obsession by Maggie Shayne
Hard to Come By by Laura Kaye
Light My Fire by G.A. Aiken
Lovely Wild by Megan Hart
Never Judge a Lady by Her Cover by Sarah MacLean
Night Shift by Nalini Singh et al.
Symbiont by Mira Grant
The Darkest Touch by Gena Showalter
The Tears of the Rose by Jeffe Kennedy
'Til Death by Bella Jewel
To Desire a Highlander by Sue-Ellen Welfonder
Twice Tempted by Eileen Dreyer

• December 1
Forever Dante by Day Leclaire
The Missing Heir by Barbara Dunlop
Crimson Angel by Barbara Hambly
Just Once More by Rosalind James
Murder at the Chase by Eric Brown
Paying the Ferryman by Jane A. Adams
Death With All The Trimmings by Lucy Burdette

• December 2
Mai Tai'd Up by Alice Clayton
Once Upon a Grind by Cleo Coyle
Merry Christmas, Baby by Jill Shalvis
A Mistletoe Christmas by Carla Cassidy et al.
You Were Mine by Abbi Glines
Forever with Me by Kristen Proby
Aground On St. Thomas by Rebecca M. Hale
Checkmate by Steven James
Darkness Falls by Keri Arthur
Full Force and Effect by Tom Clancy, Mark Greaney
If You've Got It, Haunt It by Rose Pressey
Inspector Specter by E.J. Copperman
Keeper of the Castle by Juliet Blackwell
Love Me Tender by Susan Fox
The Ghost and Mrs. Mewer by Krista Davis
The Queen by Kiera Cass

• December 5
You and Everything After by Ginger Scott

• December 19
Against the Wall by Debra Webb & Regan Black

• December 30
All At Once by Nora Roberts
All For You by Susan Mallery et al.
Illicit by Lisa Jackson
Die Again by Tess Gerritsen
Paw and Order by Diane Kelly
Rain on the Dead by Jack Higgins
Say Yes to the Marquess by Tessa Dare

• December 31
Four Nights With the Duke by Eloisa James

More titles can be found here.

Ah. There you are, Catherine. Welcome to the challenge.

I'm in, at the Newbie level.

I'm in. I get a lot of just released books to read for reviews so I should shoot for the moon and go for
addict, but I'll start with Novice and move up if I can!

Im in , going for the Addict stage!!

Lisa Kay wrote: "Ah. There you are, Catherine. Welcome to the challenge."

Welcome to the challenge, Lesley and Kari!

Mod
Welcome to the challenge, Megan!

I'm In! I'd like to start at Newbie level since I have some other books i plan to read this year and I may move up if that's okay

Mod
Welcome to the challenge, Susan!

I would like to Participate. I think I can do novice level at least.
January

Mod
Welcome to the challenge, Vickie!

Ok I am going to try for regular. Let's hope I can make it!

I'm in too. Gonna start with Newbie Level and try for a higher level from there.

January Releases
Enders by Lissa Price
Unhinged by A.G. Howard
Evertrue by Brodi Ashton
✓Erased by Jennifer Rush 02/20/14
Cruel Beauty by Rosamund Hodge
Uninvited by Sophie Jordan
Into the Still Blue by Veronica Rossi
The Widow File: A Thriller by S.G. Redling
Wulfe Untamed by Pamela Palmer
✓The Impossible Knife of Memory by Laurie Halse Anderson 03/24/14
✓No One Else Can Have You by Kathleen Hale 02/23/14

August 05: Gates of Thread and Stone by Lori M. Lee *pre-ordered*
August 05: The Girl from the Well by Rin Chupeco
August 05: Of Metal and Wishes by Sarah Fine
August 05: The House of the Four Winds by Mercedes Lackey
August 07: Blind by Rachel DeWoskin
August 14: Fiendish by Brenna Yovanoff
August 19: Hard to Hold on To***pre-ordered***
August 19: Storm Siren by Mary Weber
August 26: The Bullet-Catcher's Daughter by Rod Duncan
August 26: The Beautiful Ashes by Jeaniene Frost
August 26: Lock In by John Scalzi

Mod
Welcome to the challenge, Ruth!

Mod
Welcome to the challenge, Gea!

I read a lot also, but not always new releases. I'll try to be set as regular,please!

I will try for a newbie and read at least 1 new book to widen my reading experience.

Mod
Welcome to the challenge, Carissa and Natalie!