,
Discover new books on Goodreads
See if your friends have read any of Mur Lafferty's books 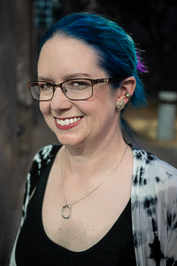 Born
in The United States
Website
http://www.murverse.com
Twitter
mightymur
Genre
Science Fiction & Fantasy, Humor
Influences
Neil Gaiman, Connie Willis, China Mieville, Madeline L'Engle Neil Gaiman, Connie Willis, China Mieville, Madeline L'Engle ...more
Member Since
February 2009
URL
https://www.goodreads.com/mightymur
edit data
Mur Lafferty is the author of Solo: A Star Wars Story and the Hugo and Nebula nominated novel Six Wakes, The Shambling Guides series, and several self pubbed novels and novellas, including the award winning Afterlife series. She is the host of the Hugo-winning podcast Ditch Diggers, and the long-running I Should Be Writing. She is the recipient of the John Campbell Award for best new writer, the Manly Wade Wellman Award, the Best Fancast Hugo Award, and joined the Podcast Hall of Fame in 2015, its inaugural year.

NOTE- Goodreads mail is NOT a good way to get in touch with me. If you wish to reach me, contact information is available at my website.

S18 Ep57 NOTE- we had a number of technical difficulties, including a part where the stream drops off and then returns. Please take note.    I can't remember if we swore in this one, but just in case, this has an EXPLICIT tag.   T. Kingfisher and What Moves the Dead  Mur's Page
View more on Mur Lafferty's website »
Like  •  0 comments  •  flag

Mur Lafferty is currently reading
A is for Arsenic: The Poisons of Agatha Christie
by Kathryn Harkup
bookshelves: 2020-books, non-fic, women-writers, currently-reading

More of Mur's books…
Quotes by Mur Lafferty  (?)
Quotes are added by the Goodreads community and are not verified by Goodreads. (Learn more)
“Strength is taking charge of your own destiny and not waiting on others to do so. You don’t have to swear and drink and beat people up and slay monsters. You’re allowed to cry and take care of children and cook and get your heart broken and dress up and date and get pregnant. But when decisions have to be made, a strong character makes them and doesn’t wait for someone else.”
― Mur Lafferty
tags: female-hero, women, writing
20 likes
Like

“I should be writing ...”
― Mur Lafferty
tags: writer-quotes, writers-on-writing, writing-craft, writing-life
14 likes
Like

“Extremist individuals live inside every single group on the planet. Devout followers from Christian to Muslim who kill in the name of God, down to people who perpetuate a cycle of abuse from parent to child. And do you know at what point they’re labeled as terrorists?”
Martini said, “When the government—”
“When the news reports it. The news can take a starving refugee and make them into an invading migrant. One of my Black ancestors was photographed carrying diapers over his head after a flood. They called him a ‘looter.’ A white man was photographed doing the same thing. They called him a ‘survivor.”
― Mur Lafferty, Six Wakes

“Why do only the awful things become fads? I thought. Eye-rolling and Barbie and bread pudding. Why never chocolate cheesecake or thinking for yourself?”
― Connie Willis, Bellwether
tags: barbie, bellwether, fads, humour, independence
184 likes
Like

“Actually, writers have no business writing about their own works. They either wax conceited, saying things like: 'My brilliance is possibly most apparent in my dazzling short story, "The Cookiepants Hypotenuse."' Or else they get unbearably cutesy: 'My cat Ootsywootums has given me all my best ideas, hasn't oo, squeezums?”
― Connie Willis, The Winds of Marble Arch and Other Stories
tags: conceit, creative-process, criticism, critique, inspiration, on-writing, reviewing, reviews, writers
66 likes
Like

Thank you for adding me as a friend. =)