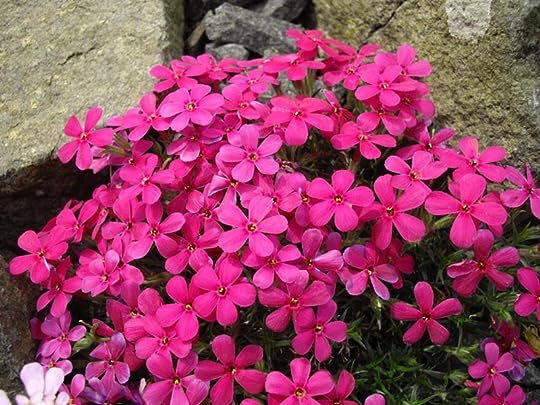 This name came from the herb moss pink or wild ground phlox which is one of the earliest widespread flowers of the spring.

TO PARTICIPATE IN THE APRIL CHALLENGE:

♦Pairs will be posted on March 21st.

♦Select a series for your partner between March 21st and 25th...sooner is better

Wow already! Okay I am in again :D

Hilary's Picks for April are

Fear in the Sunlight

The Case of the Caged Cockers

Twinkle, Twinkle, Little Star, There's a Body in the Car

Devereaux Dime Store Series by Denise Swanson (new to me)


My choices this month are all ongoing:

The Darling Dahlias series by Susan Wittig Albert, Books 1 and 2 (New to me)

Fethering series by Simon Brett, Books 1 and 2 (New to me)

Farmers' Market Mystery series by Paige Shelton, Books 1 and 2 (New to me)

Fresh Baked Mystery series by Livia J. Washburn, Books 1 and 2 (New to me)

I am in. will edit in my books later tonight 📚

I'm back for April

I'm in again, even though I did not finish any of my March books.

Mine are all on-going:

This one is new to me Susan Wittit Albert

That is me for the month of April

I'm in again. All of these are ongoing series:

I'm back and ready for another go at this.

I'm in for April. Here are my picks:

I'll be travelling a fair bit in April in my campervan, so I'm posting a mix of ebooks and paperbacks. I think I need more cozies as audiobooks, as I listen to quite a few on long distance drives.

Murder on the SS Rosa

These are all continuing series for me. Because of what has been available at the library, I haven't been able to read them all in order, but I'd still like to work on them. So, here are my April picks:
Miss Marple, Agatha Christie
Hercule Poirot, Agatha Christie
Inspector Gamache/Three Rivers, Louise Penny
Maisie Dobbs, Jacqueline Winspear
Agatha Raisin, M.C. Beaton

My April picks. four on going and one new
Inspector Gamache mysteries by Louise Penny
A Rule against Murder and The Cruelist Month

I don't think I can finish my March reading unfortunately :( It's already Mar 19 and haven't even finished one yet. I'm entering for April again with my March selections included.

Seaside Knitters Mystery by Sally Goldenbaum
#1.Death By Cashmere
#2. Patterns in the Sand

Lighthouse Library Mystery by Eva Gates
#1. By Book Or By Crook
#2. Booked for Trouble

Cat in the Stacks by Miranda James

I'm in again this month and here are my series choices:

Mod
Welcome to this month's serial reader challenge. Pairs are posted in msg 2. Please pick a series for your partner.

I've got to pick the Tara Holloway books for you. I really enjoy them and no one has ever picked them for me any time I put them up here, so I have to give them to you. Happy Reading!

Tough choice as I haven't read anything in any of those series. I have heard lots of good things about author Simon Brett so I pick the Fethering series.

Hi Linda - some great choices there but I am picking the Library Lover's Mysteries for you and I hope you enjoy them as much as I do!

Thank you! I love her cupcake series and have been wanting to start this one.

I pick for Danielle the Haunted Vintage Mystery. Happy Reading!

Suranjana wrote: "Hey I'm in too. These are my choices. 😀

Seaside Knitters Mystery by Sally Goldenbaum
#1.Death By Cashmere
#2. Patterns in the Sand


I had a hard time picking one, Suranjana. They all sound like they'd be fun to read. But since I know none of the series, I have only the titles to to pick from. Much as I love "Death by Cashmere" and "Killer in Crinoline," they aren't form the same series. So I'm going with the Cookbook Nook series for "Final Sentence" and "Inherit the Word." Bon appetit!

Jeanne, it's definitely time to get out of snow country and head for the warm South. So I'll pick Lowcountry series for you for April.

Sharon wrote: "These are all continuing series for me. Because of what has been available at the library, I haven't been able to read them all in order, but I'd still like to work on them. So, here are my April p..."

Hope you enjoy the series!

I think I picked the wrong series for you. Go with Joanne Fluke and Hannah Swenson. These are my favorite cozies.

Hi Helen. I pick for you Cats in Trouble Mystery series by Leann Sweeney. Happy traveling and happy reading. 🙂

Hi Sharon thank you! I like that you picked cookbook nook mysteries. I adore cookbooks. Let's see how much I enjoy these books... 🙂

I pick for you the Charmed Pie series, I like Ellery Adams books> I hope you enjoy them

I love flowers so I pick the Flower Shop Mysteries for you. Have fun and happy reading!

Linda C wrote: "I'm back and ready for another go at this.

Mary wrote: "I'm in again, even though I did not finish any of my March books.

Mine are all on-going:

I am going to pick Maggie Sefton’s knitting series for you. I have been curious about that one myself. Let us know how you like them. Happy reading!

Hello Connie,
For you I pick the Aurora Teagarden series. I hope you enjoy.

Tough choice as I haven't read anything in any of those series. I have heard lots of good things about author Simon Brett so I pick the Fethering series.

I'm picking Hamish MacBeth for you. This is a series my brother-in-law loves and I have been meaning to read. Maybe your comments will get me to it.

Meg wrote: "Linda C wrote: "I'm back and ready for another go at this.

#1 [bookcover:Agatha Raisin and the Day the Floods C..."

Hilary, I pick the Josephine Tey mysteries for you!!

Oh excellent. I’ve been meaning to read these since this series had 3 books. What is it up to now, about 12?? Lol

Jennifer wrote: "Hilary, I pick the Josephine Tey mysteries for you!!"

Thank you Jennifer - I will be glad to be reading these again!

Thanks, Cynthia. I just added that series to my list, so I'm looking forward to getting started on it.