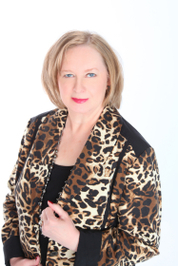 Connie holds an MFA in Fine Art (film production and animation) and taught courses at the university level before moving on to bookstore management. Nowadays, if she isn't writing or editing, she's dreaming up her next book. Connie Suttle lives in Oklahoma with her husband and three cats.

Connie holds an MFA in Fine Art (film production and animation) and taught courses at the university level before moving on to bookstore management. Nowadays, if she isn't writing or editing, she's dreaming up her next book. ...more

This isn't a question so much as a request. Will you ever share your oatmeal cookie recipe with us? :-)
Connie Suttle Hi Heather!

This is the recipe I've used for years. There's really nothing special about it but they always disappear when I make them.

This is the recipe I've used for years. There's really nothing special about it but they always disappear when I make them.

Note--my son and I don't like raisins in our oatmeal cookies, but my husband loves them. I usually divide the cookie dough before baking and add raisins to his part--in a separate bowl, of course. If you do this, you'll have to gauge how many raisins to put in--just don't overdo it or the cookies will fall apart.

cream sugars and shortening together, then add eggs, vanilla, salt and baking soda and mix thoroughly.

Bake for 10-12 minutes (I watch carefully while they're baking--the best cookies are golden brown (slightly crisp) on the bottom and still a little chewy on top when they come out of the oven).

Yeah, I know you're supposed to let them cool, but who does that? I eat at least two or three as soon as they've cooled enough not to burn my tongue (#oatmealcookieheaven)

I always use old fashioned oats, too, because to me, they're just better. I think the original recipe (I may have gotten it off an oat box years ago) said quick oats. I will never, ever use quick oats in my cookies.

When I worked for Borders (I left the company in 2007), we used to get faxes all the time from questionable sources, asking us to please sell them XX numbers of Law Dictionaries or Bibles. The reason I used two X's is because they always asked for double-digit quantities. They always offered to pay using a credit card number, and listed an address in another country as the shipping address.

Legend of the Ir'Indicti (5 books)
by
Connie Suttle (Goodreads Author)

“like every major shift in history, there will be those who find it difficult to deal with the changes," Winkler observed. "It's like a rising tide. The water comes in and then recedes. Floods in again and recedes. But each time, it rises a little higher. We have to keep our eyes on the place that marks our highest goal and refuse to let the receding waves drag us away from it.”
― Connie Suttle, Bumble
2 likes
Like

“While I ate a peanut butter sandwich later, I switched on the news. A microphone was shoved in Hank's face and I blinked at him in shock. He was angry—extremely so—and not just with the reporter—I could tell by his words.

"Yes, my assistant manager didn't show up for work last night. I called the police because John is always on time and never misses a shift. I am only discovering now, through you, that his body was found near the wharf an hour ago."

"The police didn't call you?" The reporter—a young woman—feigned surprise.

"No. I assume they notified John's family first. How did you learn of the murder?"

"Through ah, well, the usual channels," she stuttered. I figured she'd gotten information through a source or listened in on police communications.

"You probably shouldn't mess with Hank right now," I spoke to the television screen. Too bad the reporter couldn't hear me.

"Are you involved in your assistant manager's disappearance?" Her question proved (to me, at least) that she had very little common sense.

"My whereabouts have already been disclosed to the police, who are in charge of this investigation, no matter how much you'd prefer to believe otherwise," Hank growled. "Where were you when my assistant manager disappeared?"

"I can account for my time last night. Can you?" I almost laughed as she turned a bright pink. Yes, I dropped my shield and read her. She'd been in bed with her (married) producer. The station quickly cut to commercial while I snickered.”
― Connie Suttle, Blood Revolution

“I understand that," he nodded. "I wanted to see you—tell you that I'm available if you need anything, or to run interference if somebody upsets you." He smiled at that—he was offering to act as a father figure if I needed it, to intercede on my behalf with what looked to be a gathering herd of potential mates.

"That may be the nicest thing anybody has offered to do for me, ever." I smiled at him, but my lower lip trembled slightly. Nobody had ever asked to be my parent before. I had someone stepping up now.”
― Connie Suttle, Blood Revolution
2 likes
Like

Otherworld/Sisters of the Moon by Yasmine Galenorn
1 vote, 3.3%

Lords of the Underworld by Gena Showalter
0 votes, 0.0%

Women of the Otherworld by Kelley Armstrong
0 votes, 0.0%
30 total votes
4 comments
Sign in to vote »

Reader's Entertainment — 100 members — last activity May 02, 2016 08:04PM
Book video, author interviews, reviews, webisodes and more! If you have something that you think will entertain readers post it here!

Chloe Neill
author of
Some Girl...

Meg Cabot
author of
The Princ...

Margo wrote: "Your books are one of the few among hundreds if not thousands that I can't wait to read. When I'm starting to read one page I'm becoming impatient and I'm starting to look on the next page because ..."

Thank you so much, Margo! I'm writing late tonight, because Destroyer is still not finished. Things are coming together for Demon's King, However. Thank you for writing--your note made my day!

Your books are one of the few among hundreds if not thousands that I can't wait to read. When I'm starting to read one page I'm becoming impatient and I'm starting to look on the next page because I want to know what happens next. I have to take a deep breath and breath out slowly and start reading it slowly from start to finish. And when the book ends I don't want it to end so I re read it again and again. And that is how much your books are precious to me :)

Eliza wrote: "Thanks for the friendship. I just discovered your books from Ilona Andrew's blog. I'm almost finished with Blood Wager, and I absolutely love it. I'm so excited to see it is only the first of ma..."

Thanks for the friendship. I just discovered your books from Ilona Andrew's blog. I'm almost finished with Blood Wager, and I absolutely love it. I'm so excited to see it is only the first of many books in the series. Yay!