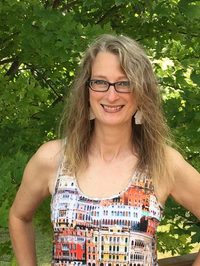 Born
The United States
Website
http://www.larissaione.com
Genre
Romance, Fiction, Paranormal
Member Since
March 2009
edit data
Air Force veteran Larissa Ione traded in a career in meteorology to pursue her passion of writing. She has since published dozens of books, hit several bestseller lists, including the New York Times and USA Today, and has been nominated for a RITA award. She now spends her days in pajamas with her computer, strong coffee, and supernatural worlds. She believes in celebrating everything, and would never be caught without a bottle of Champagne chilling in the fridge…just in case. She currently lives in Wisconsin with her retired U.S. Coast Guard husband, her son, a rescue cat named Vegas, and her very own hellhounds, a King Shepherd named Hexe and a Belgian Malinois named Duvel.

A lot has happened since then. Mainly...life. There was this perfect storm of stuff that hit me all at once, and I had to take a step back from writing as much as I wanted to. Thankfully, I had the support of 1001 Dark Nights, which allowed me to write a novella or two a year while I got my shit together.

“I'll bet you could make a woman throw out all her toys”
― Larissa Ione, Pleasure Unbound
tags: tayla
210 likes
Like

“Tayla cursed under her breath. "I was just explaining to Eidolon that Sin is a Smurfette."
Wraith swung his big body around to study Sin with blue eyes that were very different from Shade's, E's. and Lore's. Sin's, too. "Nah. Smurfette is way hotter."
"What the fuck is a Smurfette?" Eidolon was seriously getting annoyed now.
"There's this cartoon called The Smurfs," Tayla explained, slowly, as though Eidolon were the child here.
"They're these little blue people, and they're all male. But one day a female shows up. She shouldn't exist, but she does."
Eidolon considered that for a second. "How did she get there?"
"An evil wizard named Gargamel made her," Tayla said. "In a lab or something."
"So you're suggesting that an evil wizard made Sin?"
"Of course not, silly. I'm just saying she's a Smurfette. A lone female amongst males."
Eidolon frowned. "Did the Smurfette mate with the males?"
"Dude." Wraith grimaced. "It's a cartoon.”
― Larissa Ione, Ecstasy Unveiled
tags: demonica, humor, smurfs
185 likes
Like

“Congratulations on the new spawn, by the way."
"Well," Gem said, "that was better than what Wraith said." She lowered her voice and did an imitation of Wraith. "Way cool about the fuck-trophy.”
― Larissa Ione, Ecstasy Unveiled
176 likes
Like

Which September New Release would you like to read in November?

Books were randomly chosen from Goodreads' "Most Popular Books Published In September 2013" list.

Autumn Whispers by Yasmine Galenorn
(Otherworld/Sisters of the Moon, #14)
0 votes, 0.0%

Kresley Cole
author of
A Hunger ...

Gena Showalter
author of
The Darke...

Ken Follett
author of
The Pilla...

Very Excited about the news I saw at Riptide...I am going to preorder the book. Bring it! I am ready! A Demonica m-m book---that's awesome.

I just found out that I am the winner of a copy of Rogue Rider (Lords of Deliverance, #4. I am a FIRST READER of this book and I feel so lucky and am very excited to get started when this book arrives.

Thanks for the friendship Larissa!! You've made my day!! <3

I was just wondering if there was any way one can find out which part was written by you and which part was written part the other writer in the Acro series. When I was reading it I kept trying to figure it out, but I think I could mostly figure it out when the hot scenes came on, and I would be like ya this one was you. I would love to know if I was right. And if not that's cool, just figured I would put the question out there.

Thanks for the update on the LOD books, I guess I will be reading them sooner than I thought. Can't wait! Oh just you know your page has 5 books listed for the LOD books maybe it was a typo, you probably already know that.

Sorry I had to refer to the other writer, as the other writer I just can't remember her right now. But don't worry I'll get to her books soon, and if there as good as ACRO's were, I won't forget her name. I promise! LOL!

I was just wondering is there going to be any more storm books under Sydney Croft or will there be a spin off? Either way I would very much love to read more in that series. I got a kick out of Annika and Creed.

Mina wrote: "Thanks for the friendship Larrisa! Love the Demonica series. Can't wait to read Lord of Deliverances Series. Thanks for letting me know there's going to be 5 books in that series. I won't start..."

Hi Mina! There's actually only 4 in the series...but they continue off the Demonica series...it's kind of all one big series, though the LOD books are connected by the Horsemen. The book after the LOD series will be Reaver's, and will either kick off a new spinoff or will stand alone. Hope that makes sense! And thanks for the friendship!

Thanks for the friendship Larrisa! Love the Demonica series. Can't wait to read Lord of Deliverances Series. Thanks for letting me know there's going to be 5 books in that series. I won't start reading it until they are all out. I just hate having to way for next one to come out after done with the previous one. So I'll be checking in often. Happy reading!

Thanks for the friendship, Larissa! Love Demonica series and I can't wait to read Immortal Rider! Good news the release date already forward to November :)

Thanks for the add Larissa! Looking forward to reading your books :)

Thanks for the friend accept! LOVE your novels!!

Loved Eternal Rider, unputtdownable! I hope my review did your book justice. The book had everything in it that was compelling.

I really liked how you sneak in a reference to my fav band AC/DC. You ROCK!

Can't wait for the next book. December, way too long to wait.

Thank you for accepting my friend request. I am with everyone else, if I don't get Eternal Rider the day of its release, I will go mad LOL! Thank you again :)

Hello, Larissa, thank you for accepting my friend request :) I can't wait for Eternal Rider...I've already pre-ordered it!

Thanks for the add, Larissa. Have a great day.

hi thanks for accepting me...want to say i love your books....and look forward to reading more

Hi Larissa! Thanks for the friend acceptance! I just wanted to say you are my newest favourite author! I LOVE your Demonica series. I can't wait for Eternal Rider to come out!

I want to say thanks for becoming my friend! And that I LOVE your Demonica series and I think that you are so awesome!!!Can't wait for the spin series to get here. And by the way just start Sin Undone can't get enough it so hard to put down lots of good hot stuff in it "This book makes my day !!!

Thank you for adding me

Hi Larissa,
Thanx for the add:) I agree the cover of Sin Undone is Gorgeous and I can't wait to read it either.

thank you for the friend acceptance! I'm completely in love with the demonica series and I'm dying waiting for sin undone!

Hey, I'm a fan. I've read your work. So I'm not too shameless when I ask you to read mine..THE FEATHERY.

Hi Larissa! Thanks for friending me - it's always nice to meet someone else from the 'burg, though I'm originally from the north. It looks like we share some interests in books - or, at least, I'm interested in some of the ones you're reading/have read. Talk to you anon.