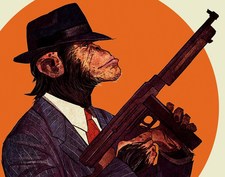 This will prevent Chompa from sending you messages, friend request or from viewing your profile. They will not be notified. Comments on discussion boards from them will be hidden by default.
Sign in to Goodreads to learn more about Chompa.

See all 4 books that Chompa is reading…

“Folks are usually about as happy as they make their minds up to be.”
― Abraham Lincoln
tags: attributed-no-source, happiness
23512 likes

“Never tell the truth to people who are not worthy of it.”
― Mark Twain
tags: truth
15835 likes

“It is not the critic who counts; not the man who points out how the strong man stumbles, or where the doer of deeds could have done them better. The credit belongs to the man who is actually in the arena, whose face is marred by dust and sweat and blood; who strives valiantly; who errs, who comes short again and again, because there is no effort without error and shortcoming; but who does actually strive to do the deeds; who knows great enthusiasms, the great devotions; who spends himself in a worthy cause; who at the best knows in the end the triumph of high achievement, and who at the worst, if he fails, at least fails while daring greatly, so that his place shall never be with those cold and timid souls who neither know victory nor defeat.”
― Theodore Roosevelt
tags: inspirational, politics, presidential
7300 likes

“Beauty is in the eye of the beholder and it may be necessary from time to time to give a stupid or misinformed beholder a black eye.”
― Jim Henson
tags: humor
26151 likes

“Men occasionally stumble over the truth, but most of them pick themselves up and hurry off as if nothing had happened.”
― Winston S. Churchill
tags: truth
6588 likes

Bookish Buddies — 112 members — last activity Jul 29, 2019 12:52PM
A nice cozy corner where you can discuss your buddy read or whatever other random topics come to mind.

Edgar Rice Burrough Fans — 59 members — last activity Aug 22, 2020 09:54AM
This is THE group for those who grew up with Tarzan and John Carter of Mars and want to see these books still popular for our kids and grandkids

Robert B. Parker
author of: The Godwulf Manuscript

David Brin
author of: The Postman

Polls voted on by Chompa