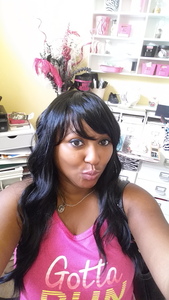 This will prevent MsBDiamondDiva1 from sending you messages, friend request or from viewing your profile. They will not be notified. Comments on discussion boards from them will be hidden by default.
Sign in to Goodreads to learn more about MsBDiamondDiva1.

See all 44 books that MsBDiamondDiva1 is reading…

“I’m trying to decide whether to tell you two to get a room or go barf in the trash can,” Emma said. “I’m leaning toward the second choice. You are both getting way too weird. And gross.”

Cal barked out a laugh and slid his fingers down my arm to entwine with mine. His touch, and Emma’s comments, only made me blush more. Looks like Emma saw Cal lick my face after all.

Now that wasn’t awkward or anything.”
― E.J. Stevens, Legend of Witchtrot Road

I turned back to her and tapped my chest. “That’s what this suit’s always been about. Not scaring people like you or Gorgon do. Not some sort of pseudo-sexual roleplay or repressed emotions. I wear this thing, all these bright colors, because I want people to know someone’s trying to make their lives better. I want to give them hope.”
― Peter Clines, Ex-Heroes

Polls voted on by MsBDiamondDiva1