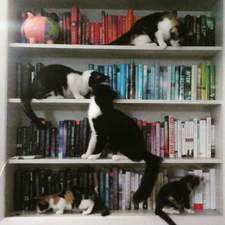 WTF Are You Reading?

Block WTF Are You Reading??

WTF Are You Reading?’s Bookshelves

WTF Are You Reading? is Currently Reading

WTF Are You Reading? is currently reading
The Merman's Kiss (Mates for Monsters, #1)
by Tamsin Ley (Goodreads Author)
bookshelves: currently-reading

WTF Are You Reading? is currently reading
Shadow work workbook: The Best Workbook For Beginners To Improve Self-Awareness And Work Through Past Traumas, Suffering, And Emotions. Explore Your Shadow And Your Subconscious Psyche
by Thea Dennis
bookshelves: currently-reading

See all 175 books that WTF Are You Reading? is reading…

WTF Are You Reading?’s Quotes

“If she wasn't your grandmother I'd shoot her."
Ranger”
― Janet Evanovich, Hot Six
tags: family
77 likes

“I see you looking at my cookies,' my father said to Morelli. 'Don't even think about it. Go get your own cookies.”
― Janet Evanovich, Twelve Sharp
82 likes

She will not be simple and sweet. She will not be what people tell her to be. That Bunny Rabbit is dead.”
― E. Lockhart, The Disreputable History of Frankie Landau-Banks

“There was a soft chuckle beside me, and my heart stopped.
"So this is Oberon's famous half-blood," Ash mused as I whirled around. His eyes, cold and inhuman, glimmered with amusement. Up close, he was even more beautiful, with high cheekbones and dark tousled hair falling into his eyes. My traitor hands itched, longing to run my fingers through those bangs. Horrified, I clenched them in my lap, trying to concentrate on what Ash was saying. "And to think," the prince continued, smiling, "I lost you that day in the forest and didn't even know what I was chasing."
I shrank back, eyeing Oberon and Queen Mab. They were deep in conversation and did not notice me. I didn't want to interrupt them simply because a prince of the Unseelie Court was talking to me.
Besides, I was a faery princess now. Even if I didn't quite believe it, Ash certainly did. I took a deep breath, raised my chin, and looked him straight in the eye.
"I warn you," I said, pleased that my voice didn't tremble, "that if you try anything, my father will remove your head and stick it to a plaque on his wall."
He shrugged one lean shoulder. "There are worse things." At my horrified look, he offered a faint, self-derogatory smile. "Don't worry, princess, I won't break the rules of Elysium. I have no intention of facing Mab's wrath should I embarrass her. That's not why I'm here."
"Then what do you want?"
He bowed. "A dance."
"What!" I stared at him in disbelief. "You tried to kill me!"
"Technically, I was trying to kill Puck. You just happened to be there. But yes, if I'd had the shot, I would have taken it."
"Then why the hell would you think I'd dance with you?"
"That was then." He regarded me blandly. "This is now. And it's tradition in Elysium that a son and daughter of opposite territories dance with each other, to demonstrate the goodwill between the courts."
"Well, it's a stupid tradition." I crossed my arms and glared. "And you can forget it. I am not going anywhere with you."
He raised an eyebrow. "Would you insult my monarch, Queen Mab, by refusing? She would take it very personally, and blame Oberon for the offense. And Mab can hold a grudge for a very, very long time."
Oh, damn. I was stuck.”
― Julie Kagawa, The Iron King

“If you're looking for sympathy you'll find it between shit and syphilis in the dictionary.”
― David Sedaris, Barrel Fever: Stories and Essays
tags: sympathy
6327 likes


More of WTF Are You Reading?’s quotes…

More of WTF Are You Reading?’s groups…

WTF Are You Reading?’s Year In Books

Sheree | Keeping Up With The Penguins

People WTF Are You ... is Following

More…
85 people are following WTF Are You Reading?

Polls voted on by WTF Are You Reading?

Lists liked by WTF Are You Reading?