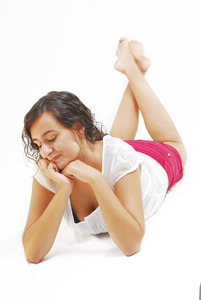 This will prevent Aida from sending you messages, friend request or from viewing your profile. They will not be notified. Comments on discussion boards from them will be hidden by default.
Sign in to Goodreads to learn more about Aida.

“Just because something seems impossible doesn’t make it untrue,”
― Deborah Harkness, A Discovery of Witches
400 likes

“Somewhere in the center of my soul, a rusty chain began to unwind. It freed itself, link by link, from where it had rested, unobserved, waiting for him. My hands, which had been balled up and pressed against his chest, unfurled with it. The chain continued to drop, to an unfathomable depth where there was nothing but darkness and Matthew. At last it snapped to its full length, anchoring me to a vampire. Despite the manuscript, despite the fact that my hands contained enough voltage to run a microwave, and despite the photograph, as long as I was connected to him, I was safe.”
― Deborah Harkness, A Discovery of Witches
tags: diana-bishop, matthew-clairmont
130 likes

“The most beautiful experience we can have is the mysterious. It is the fundamental emotion that stands at the cradle of true art and true science. Whoever does not know it and can no longer wonder, is as good as dead, and his eyes are dimmed (Albert Einstein)”
― Deborah Harkness, A Discovery of Witches
tags: science
151 likes

“Are you smelling me?” After yesterday I suspected that my body was giving him all kinds of information I didn't want him to have.

“Don't tempt me,” he murmured.”
― Deborah Harkness, A Discovery of Witches
100 likes

Polls voted on by Aida