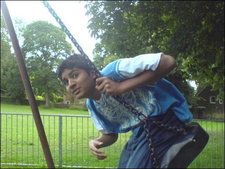 This will prevent Mahesh from sending you messages, friend request or from viewing your profile. They will not be notified. Comments on discussion boards from them will be hidden by default.
Sign in to Goodreads to learn more about Mahesh.

I’ve got two daughters who will have to make their way in this skinny-obsessed world, and it worries me, because I don’t want them to be empty-headed, self-obsessed, emaciated clones; I’d rather they were independent, interesting, idealistic, kind, opinionated, original, funny – a thousand things, before ‘thin’. And frankly, I’d rather they didn’t give a gust of stinking chihuahua flatulence whether the woman standing next to them has fleshier knees than they do. Let my girls be Hermiones, rather than Pansy Parkinsons.”
― J.K. Rowling
tags: character, fat, girls, j-k-rowling
1982 likes

“The planet has survived everything, in its time. It will certainly survive us.”
― Michael Crichton, Jurassic Park
tags: ontology
365 likes

“We came to see Jace. Is he alright?"
"I don't know," Magnus said. "Does he normally just lie on the floor like that without moving?”
― Cassandra Clare, City of Ashes
tags: clary-fray, jace, magnus-bane
10636 likes

“It is impossible to live without failing at something, unless you live so cautiously that you might as well not have lived at all - in which case, you fail by default.”
― J.K. Rowling
25540 likes

Curtis Jobling
author of: Rise of the Wolf

Best YA to Appeal to Girls

Books That Should be good movies

Polls voted on by Mahesh