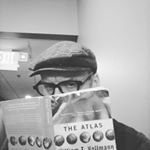 This will prevent Christopher from sending you messages, friend request or from viewing your profile. They will not be notified. Comments on discussion boards from them will be hidden by default.
Sign in to Goodreads to learn more about Christopher.

Christopher Daniel is currently reading
Zona: A Book About a Film About a Journey to a Room
by Geoff Dyer (Goodreads Author)
bookshelves: currently-reading

“Penetrating the literary inferno, you will come to learn its artifices and its arsenic; shielded from the immediate, that caricature of yourself, you will no longer have any but formal experiences, indirect experiences; you will vanish into the Word. Books will be the sole object of your discussions. As for literary people, you will derive no benefit from them. But you will find this out too late, after having wasted your best years in a milieu without density or substance. The literary man? An indiscreet man, who devaluates his miseries, divulges them, tells them like so many beads: immodesty - the sideshow of second-thoughts - is his rule; he offers himself. Every form of talent involves a certain shamelessness. Only sterility is truly distinguished - the man who effaces himself along with his secret, because he disdains to parade it: sentiments expressed are an agony for irony, a slap at humor.

To keep one's secret is the most fruitful of activities. It torments, erodes, threatens you. Even when confession is addressed to God, it is an outrage against ourselves, against the mainspring of our being. The apprehensions, shames, fears from which both religious and profane therapeutics would deliver us constitute a patrimony we should not allow ourselves to be dispossessed of, at any cost. We must defend ourselves against our healers and, even if we die for it, preserve our sickness and our sins. The confessional? a rape of conscience perpetrated in the name of heaven. And that other rape, psychological analysis! Secularized, prostituted, the confessional will soon be installed on our street corners: except for a couple of criminals, everyone aspires to have a public soul, a poster soul.”
― E.M. Cioran
1 likes

“I’ve had enough of someone else’s propaganda… I’m for truth, no matter who tells it. I’m for justice, no matter who it is for or against. I’m a human being first and foremost, and as such I’m for whoever and whatever benefits humanity as a whole.”
― Malcolm X, The Autobiography of Malcolm X
tags: humanity, justice, truth
114 likes

“Cultural production, criticism, and programming are now governed, in their totality, by indoctrinated middlebrow assholes, educated beyond their intelligence, who assume that anyone from a red state won’t understand it or wouldn’t be interested.

I would struggle to argue to the alt-right YouTuber that Ben Lerner didn’t hate him. But I would argue against his position that the art world isn’t for us, us being the red state rabble. The working class, the uneducated, the failures, and the washed out. We are creators too. And we are allowed to circumvent the tastefulness of the establishment, the cultural gatekeepers, and the university powerhouse. The art world hates us, yes. But art doesn’t.”
― Jessa Crispin, The Baffler
0 likes

“I have read all the books, and I am still unhappy.”
― Stephan Mallarmé
1 likes

Polls voted on by Christopher