Discover new books on Goodreads
See if your friends have read any of William T. Vollmann's books 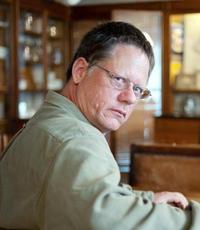 3.92 avg rating — 421 ratings
Quotes by William T. Vollmann  (?)
Quotes are added by the Goodreads community and are not verified by Goodreads. (Learn more)
“So he lent her books. After all, one of life's best pleasures is reading a book of perfect beauty; more pleasurable still is rereading that book; most pleasurable of all is lending it to the person one loves: Now she is reading or has just read the scene with the mirrors; she who is so lovely is drinking in that loveliness I've drunk.”
― William Vollmann
112 likes
Like

“I just make the best book that I can and try to not worry about audience or if it will sell. The odds are against you, so why abuse your talent for the sake of a chimera? The only real pleasure for me in writing comes from pleasing myself. What readers think is interesting and illuminating (and it may even be correct), but that is nothing compared to the excitement of seeing a world develop. Besides, even though I like most individuals I meet, I have a pretty low opinion of people in general. So if I were to write for people in general, I would have to drastically lower my estimation of the intelligence of my reader. Rather than doing that, I write the way it seems the book has to appear. I don’t think that’s egotistic. There are often things I would like to include in my books—things about me personally and other materials—that I feel I have to leave out because they aren’t relevant to the book. I’m fairly ruthless along those lines, because I try to let nothing come in the way of what’s best for the book. If that means that the book won’t sell or that a publisher won’t buy it, then that’s my problem. I’ll suffer for that, but I won’t let the book suffer for it.”
― William T. Vollmann
tags: mccaffery-interview
43 likes
Like

“I studied Comparative Literature at Cornell. Structuralism was real big then. The idea of reading and writing as being this language game. There's a lot of appeal to that. It's nice to think of it as this playful kind of thing. But I think that another way to look at it is "Look, I just want to be sincere. I want to write something and make you feel something and maybe you will go out and do something." And it seems that the world is in such bad shape now that we don't have time to do nothing but language games. That's how it seems to me.”
― William T. Vollmann
39 likes
Like

Is this you? Let us know. If not, help out and invite William to Goodreads.