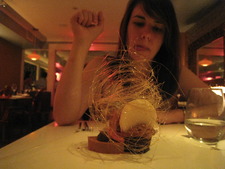 This will prevent Michelle from sending you messages, friend request or from viewing your profile. They will not be notified. Comments on discussion boards from them will be hidden by default.
Sign in to Goodreads to learn more about Michelle.

Michelle is currently reading
The Spirit Catches You and You Fall Down: A Hmong Child, Her American Doctors, and the Collision of Two Cultures
by Anne Fadiman
bookshelves: currently-reading

“It is worth repeating at this point the theories that Ford had come up with, on his first encounter with human beings, to account for their peculiar habit of continually stating and restating the very very obvious, as in "It's a nice day," or "You're very tall," or "So this is it, we're going to die."

His first theory was that if human beings didn't keep exercising their lips, their mouths probably shriveled up.

After a few months of observation he had come up with a second theory, which was this--"If human beings don't keep exercising their lips, their brains start working.”
― Douglas Adams, The Restaurant at the End of the Universe

“We read books to find out who we are. What other people, real or imaginary, do and think and feel... is an essential guide to our understanding of what we ourselves are and may become.”
― Ursula K. LeGuin
tags: books, reading
2213 likes

“Everything was beautiful and nothing hurt.”
― Kurt Vonnegut, Slaughterhouse-Five
5738 likes

Polls voted on by Michelle