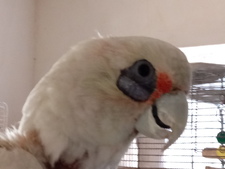 This will prevent Lynn from sending you messages, friend request or from viewing your profile. They will not be notified. Comments on discussion boards from them will be hidden by default.
Sign in to Goodreads to learn more about Lynn.

“Claire, AI: "I do not believe losing this component of my mind will be pleasant"
Ben: "No. I don't know that it will be. But maybe part of you willget to go to android heaven and the other parts of you will be that much ahppier.”
― Nathan Van Coops, The Chronothon
0 likes

“She slapped down a mug of something that was, he suspected, technically alcohol, but only because it had a good lawyer.”
― Curtis Craddock, An Alchemy of Masques and Mirrors
2 likes

“Hmm…’ Ciri bit her lower lip, then leaned over and put her eye closer to the hole. ‘Madam Yennefer is standing by a willow… She’s plucking leaves and playing with her star. She isn’t saying anything and isn’t even looking at Geralt… And Geralt’s standing beside her. He’s looking down and he’s saying something. No, he isn’t. Oh, he’s pulling a face… What a strange expression…’ ‘Childishly simple,’ said Dandelion, finding an apple in the grass, wiping it on his trousers and examining it critically. ‘He’s asking her to forgive him for his various foolish words and deeds. He’s apologising to her for his impatience, for his lack of faith and hope, for his obstinacy, doggedness. For his sulking and posing; which are unworthy of a man. He’s apologising to her for things he didn’t understand and for things he hadn’t wanted to understand—’ ‘That’s the falsest lie!’ said Ciri, straightening up and tossing the fringe away from her forehead with a sudden movement. ‘You’re making it all up!’ ‘He’s apologising for things he’s only now understood,’ said Dandelion, staring at the sky, and he began to speak with the rhythm of a balladeer. ‘For what he’d like to understand, but is afraid he won’t have time for… And for what he will never understand. He’s apologising and asking for forgiveness… Hmm, hmm… Meaning, conscience, destiny? Everything’s so bloody banal…’ ‘That’s not true!’ Ciri stamped. ‘Geralt isn’t saying anything like that! He’s not even speaking. I saw for myself. He’s standing with her and saying nothing…’ ‘That’s the role of poetry, Ciri. To say what others cannot utter.’ ‘It’s a stupid role. And you’re making everything up!’ ‘That is also the role of poetry. Hey, I hear some raised voices coming from the pond. Have a quick look, and see what’s happening there.’ ‘Geralt,’ said Ciri, putting her eye once more to the hole in the wall, ‘is standing with his head bowed. And Yennefer’s yelling at him. She’s screaming and waving her arms. Oh dear… What can it mean?’ ‘It’s childishly simple.’ Dandelion stared at the clouds scudding across the sky. ‘Now she’s saying sorry to him.”
― Andrzej Sapkowski, The Time of Contempt
58 likes

“With crowds the whole was so much less than the sum of the parts. Individuals unconsciously surrendered their intelligence and their morals to join the crowd’s collective mind in exchange for false feelings of invincibility. It was almost as if a new entity was born, an entity susceptible to suggestions and ruled by the baser instincts of man. It was so much easier to twist a man’s soul once he’d joined a crowd. A decent man caught up in the mentality of the crowd would do unspeakable things, things that would forever taint his soul. Once twisted to the Dark side few found their way back to the Light”
― Karen Azinger, The Steel Queen
tags: profound, truth
2 likes

Jodi Taylor
author of: Just One Damned Thing After Another

Joe Abercrombie
author of: The Blade Itself

Marshall Ryan Maresca
author of: The Thorn of Dentonhill

Polls voted on by Lynn