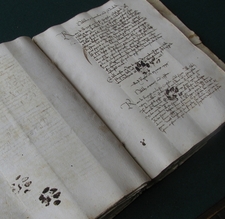 This will prevent Melmoth from sending you messages, friend request or from viewing your profile. They will not be notified. Comments on discussion boards from them will be hidden by default.
Sign in to Goodreads to learn more about Melmoth.

Melmoth is currently reading
Dark Matter: A Century of Speculative Fiction from the African Diaspora
by Sheree Thomas
bookshelves: currently-reading

“There are certain queer times and occasions in this strange mixed affair we call life when a man takes this whole universe for avast practical joke, though the wit thereof he but dimly discerns, and more than suspects that the joke is at nobody's expense but his own. However, nothing dispirits, and nothing seems worth while disputing. He bolts down all events, all creeds, and beliefs, and persuasions, all hard things visible and invisible, never mind how knobby; as an ostrich of potent digestion gobbles down bullets and gun flints. And as for small difficulties and worryings, prospects of sudden disaster, peril of life and limb; all these, and death itself, seem to him only sly, good-natured hits, and jolly punches in the side bestowed by the unseen and unaccountable old joker. That odd sort of wayward mood I am am speaking of, comes over a man only in some time of extreme tribulation; it comes in the very midst of his earnestness, so that what just before might have seemed to him a thing most momentous, now seems but a part of the general joke.”
― Herman Melville, Moby Dick
34 likes

“Seldom have I known any profound being that had anything to say to this world, unless forced to stammer out something by way of getting a living. Oh! happy that the world is such an excellent listener!”
― Herman Melville, Moby Dick
12 likes

“Book! You lie there; the fact is, you books must know your places. You'll do to give us the bare words and facts, but we come in to supply the thoughts.”
― Herman Melville, Moby-Dick or, the Whale
tags: books
33 likes

“We cannibals must help these Christians.”
― Herman Melville, Moby-Dick or, the Whale
25 likes

Polls voted on by Melmoth