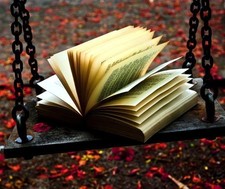 This will prevent Mojca from sending you messages, friend request or from viewing your profile. They will not be notified. Comments on discussion boards from them will be hidden by default.
Sign in to Goodreads to learn more about Mojca.

“Owen groped the back of his skull, felt a knot budding, and groaned. “Please tell me you didn’t realize it was me.”

“Of course I didn’t,” she hissed. “I never imagined you’d barge into my room at two o’clock in the morning.”

“You don’t know me very well.”
― anne barton, When She Was Wicked

“What if you were to get lost,” he pointed out.

Oh, that was the final straw. She whirled around. “However could that happen, my lord?” She notched her chin up a bit. “We’re standing on an island. Eventually I would come to an edge.”
― Julia Quinn, Four Weddings and a Sixpence: An Anthology

“She took excruciatingly small steps. If Owen’s calculations were correct, maintaining their current pace on the footpath would ensure their return to the picnic in the fall of 1820.”
― Anne Barton, When She Was Wicked
1 likes

“As Anabelle walked with Owen to the center of the ballroom, her first thought was that the orchestra really should be playing. They’d only played a set, for heaven’s sake, and already they were taking a break.

Her second thought was that while the only people actually on the dance floor were Owen and her, the whole population of England appeared to be circled around it.”
― Anne Barton, When She Was Wicked

“Most importantly, however, she had to figure out how on earth she’d manage to watch Miss Starling flirt outrageously with Owen and refrain from ripping her eyes out. It would require a bit of thought.”
― Anne Barton, When She Was Wicked
1 likes

Marsha Canham
author of: The Pride of Lions

Andrea Kane
author of: The Girl Who Disappeared Twice

Julie James
author of: Something About You
More…

Eagerly Anticipated Books Remainder of 2009 and 2010

Polls voted on by Mojca