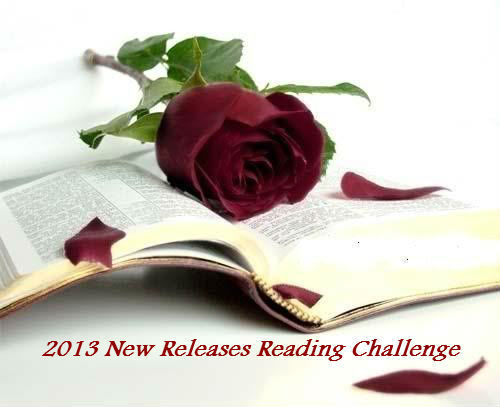 This challenge will have a threefold purpose--Firstly, we'll be able to keep track of what is coming out. Secondly, we'll be able to see if anyone else is reading what we are and create discussion threads for books for buddy reads or open discussions that are more relaxed. Lastly, it could also help us figure out what to nominate for certain months because some books you just can't wait months to read.

Set a goal for the year. You don't necessarily have to read a book in it's assigned month for it to count. The goal is to see how many books you can read that were published within said year. It'll be fun to see how many new releases we all truly read without even realizing it in one year.

This is what I've got so far:

1st - The Essence (The Pledge #2) by Kimberly Derting
1st - For the Love of a Goblin Warrior (Shadowlands #3) by Shona Husk
1st - Release Me: A Novel by J. Kenner
1st - Shadow Woman by Linda Howard
1st - Splintered by A. G. Howard
1st - Waking Up with a Rake (Regency Rakes) by Connie Mason
1st - Wyoming Bride: A Bitter Creek Novel by Joan Johnston
2nd - The One I Left Behind by Jennifer McMahon

28th - Dare You To (Pushing the Limits #2) by Katie McGarry
28th - Deeply Odd: An Odd Thomas Novel by Dean Koontz
28th - Any Duchess Will Do by Tessa Dare
28th - The Girl with the Iron Touch (Steampunk Chronicles #3) by Kady Cross
28th - Goddess (Starcrossed) by Josephine Angelini
28th - Haven Creek (A Cavanaugh Island Novel) by Rochelle Alers
28th - It Had To Be You (Lucky Harbor 7) by Jill Shalvis
28th - Leopard's Prey by Christine Feehan
28th - Love at First Sight: A Cupid, Texas Novel by Lori Wilde
28th - The Night Is Watching (Krewe of Hunters) by Heather Graham
28th - Of Triton by Anna Banks
28th - Once Upon a Tower by Eloisa James
28th - Sea Glass Island (Ocean Breeze) by Sherryl Woods
28th - Tempest Reborn by Nicole Peeler
28th - A Witch's Handbook of Kisses and Curses by Molly Harper
28th - Zero Hour (THE NUMA FILES) by Clive Cussler and Graham Brown
30th - Cloak & Silence (The League series, Book 6) by Sherrilyn Kenyon

*1st time in paperback, but came out in eBook format earlier this year (usually a month prior).

Dark Wolf Running (Bloodrunners #5) by Rhyannon Byrd
Disappear by Iain Edward Henn
Last Hit (Hitman) by Jessica Clare
Married for Christmas by Noelle Adams
Nightmaster by Susan Krinard
No Place for a Dame by Connie Brockway
Silent Echo by J. R. Rain
Until You (Fall Away Series) by Penelope Douglas
Wake to Darkness by Maggie Shayne

• December 2
Brazen by Kelley Armstrong
The Gods of Guilt (Lincoln Lawyer) by Michael Connelly
Grimnirs (A Runes Book) (YA Paranormal Romance) by Ednah Walters
Steel World by B. V. Larson

• December 6
That Autumn in Edinburgh by Ciji Ware

• December 7
Don't Say A Word by Barbara Freethy
Enslaved By The Ocean (Criminals Of The Ocean #1) by Bella Jewel
Reviving Izabel (In the Company of Killers #2) by J.A. Redmerski

• December 10
All I Want for Christmas Is a Cowboy by Jennifer Ryan
The Arrangement 12 (The Ferro Family) by H.M. Ward
A Beautiful Wedding: A Novella (Beautiful Disaster) by Jamie McGuire
Captain Of My Heart (Heroes Of The Sea) by Danelle Harmon (Kindle edition)
A Christmas Wish: Dane (MacKenzie Family) by Liliana Hart
Dirty Magic by Jaye Wells
Elect by Rachel Van Dyken
Hunted [Kindle Edition] by Karen Robards (paperback comes out in April)
Innocence: A Novel by Dean Koontz
Innocent Blood: The Order of the Sanguines Series by James Rollins
The Last of The Wise Lovers (A Suspense and Espionage Thriller) by Amnon Jackont
Storm Warning (Broken Heartland) by Caisey Quinn
Studs and Stilettos (Romantic Mystery) by Bev Pettersen
These Broken Stars by Amie Kaufman
True: 11 (New Species) by Laurann Dohner
Wolf Quest by Bianca D'Arc

• December 17
Fracture Me (Shatter Me #2.5) by Tahereh Mafi
Last Stand of the New York Institute (The Bane Chronicles) by Cassandra Clare
Misbehaving (Sea Breeze) by Abbi Glines
Out of Turn (The Kathleen Turner Series #4) by Tiffany Snow
Reaver by Larissa Ione
Shadowdance by Kristen Callihan

• December 24
French Women Don't Get Facelifts: The Secret of Aging with Style & Attitude by Mireille Guiliano
The Spider by Jennifer Estep

Awesome idea! I'll definitely try to do this one. I may only be able to do the Newbie level though. :P

Jex wrote: "I will do Easy but instead of one a month I'm going to just do 12 in a year. I'm bad with reading new releases so hopefully this will help me read some."

Uhmmm, didn't think of that option... I was wondering if I'd skip this challenge since most of the books I want to read will only be published after March/May...

And Jex, we have to read 13 for the decades challenge :o)

Totally in on this one! Going to be conservative and go for Newbie though I have a feeling it will be more then that. But I'm in for at least 13 due to the Decades challenge!

Oh, I love how I put something up and you guys refine it. :) I'll revise the top to make sure everyone knows you don't necessarily have to read a book in it's assigned month for it to count. I'm curious how many new releases we all truly read without realizing it in one year.

Mod
Does the revision make it look more doable?

I'm interested in doing this one. Can we read new releases that aren't on your list? I guess that we'd post the realse date, title and, date read?

Mod
Yes, any help in creating the list or adding to it would be appreciated.

Sorry to be difficult Lisa. I just know I won't read one a month. I'm addicted to challenges but don't read fast enough to fit them all in :-P

I like the idea of this challenge and also know that I probably won't read them in the month they come out in, but will at some point in the year read some of them. I am really surprised this year to see how many new releases of 2012 I actually read, all due to wonderful BOTM's. I'm in for this. I think I can actually do it. I'll sign up for Easy and see if it changes later on.

I think I will go for this as I am going to need to read 13 for the decade challenge.

May:
1. 7th - Dead Ever After: A Sookie Stackhouse Novel by Charlaine Harris
2. 28th - Deeply Odd: An Odd Thomas Novel by Dean Koontz

I'm in and I'll aim for Newbie

I'm in as a Newbie

I'm in...albeit a bit confused! :) do the books have to be newly published or just new to you!?

For this challenge they need to be published/released in 2013.

I'm in. I have ended up reading lots of new releases, so it's nice to have a challenge for them. However, I'll be conservative and commit to the Newbie level.

do we have to use he books you list, or can we use any book?

I will try and do this challenge for Regular


Thanks Sandy. How sure are you about Slayers Kiss(Shadow Slayer #10) by Cassi Carver being released January 1st? Amazon listed it as a February release date, but sometimes they get it wrong.

Mod
Catherine wrote: "do we have to use he books you list, or can we use any book?"

Any book that is published in 2013. If you list it, we'll add it to the appropriate monthly list in case it attracts someone else's eye as well.

The Husband List by Janet Evanovich and Dorien Kelly (Jan 8, 2013)

wow..had no clue another Witch & Wizard book was due out! good to know! hav eto add it to my list now! :)


I have a few more in my series read that have books due out! :)

Catherine wrote: "wow..had no clue another Witch & Wizard book was due out! good to know! hav eto add it to my list now! :)

I'll try to look them up tomorrow. Need to finish reading a little bit more of Spider's revenge tonight.

Lisarenee wrote: "Catherine wrote: "wow..had no clue another Witch & Wizard book was due out! good to know! hav eto add it to my list now! :)

I am in! And I am going to try for Regular level. Since I get a number of ARCs this challenge is perfect.

March: A Conspiracy of Alchemists

May: Chantress, Losing It

It was on a list of January new releases I had seen. It's possible the date has changed.

Mod
Sonia, wasn't sure if you were a yes or a no?

Mod
Stefani wrote: "I am in! And I am going to try for Regular level. Since I get a number of ARCs this challenge is perfect.

Went through Amazon and couldn't find Lilith? Is the author self published?

Here are a few from my Amazon wish list

Whiskey Beach Nora Roberts This title will be released on April 16, 2013

Calculated In Death JD Robb This title will be released on February 26, 2013


The Ocean at the End of the Lane Neil Gaiman This title will be released on June 18, 2013

Mod
Stefani wrote: "I am in! And I am going to try for Regular level. Since I get a number of ARCs this challenge is perfect.


Losing it came out already