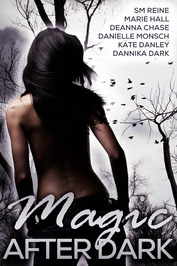 Then the day came she realized apart from the sexy bad boy she married, there'd be no vampires/shapeshifters/mermaids/fairies/or even stinky trolls in her future unless she wrote about them. More often than not she can be found roaming the wild, lush tropical forest she calls her backyard (a.k.a. Hawaii) and day dreaming constantly about her latest project.

Her Mad Hatter is the first book of her Kingdom Series.

She loves to hear from her readers and can b Marie Hall is a USA Today Bestselling author and has always held a dangerous fascination for creatures that go bump in the night. And mermaids. And of course fairies. Trolls. Unicorns. Shapeshifters. Vampires. Scottish brogues. Kilts. Beefy arms. Ummm... Bad boys! Especially the sexy ones.

Then the day came she realized apart from the sexy bad boy she married, there'd be no vampires/shapeshifters/mermaids/fairies/or even stinky trolls in her future unless she wrote about them. More often than not she can be found roaming the wild, lush tropical forest she calls her backyard (a.k.a. Hawaii) and day dreaming constantly about her latest project.

Her Mad Hatter is the first book of her Kingdom Series.

She loves to hear from her readers and can be reached at mariehallwrites@gmail.com! ...more

Nimue, daughter of Hook, is desperate to prove to her parents that she's just as brave and as much of a pirate as they are. So when she serendipitously spies the hidden isle, she knows what she must do. A fearsome creature, known as the Sea Hag, is reputed to be hiding thirteen soul orbs within its sands and rumor has it any pirate brave enough to trespass there and snatch one up will be able to h Read more of this blog post »
View more on Marie Hall's website »
7 likes · Like  •  0 comments  •  flag

“Everything has beauty," she said, "but not everyone sees it." Her stomach hurt, her eyes burned. "I saw you, Hatter." Her words whispered through the night. "I saw you." She walked away.”
― Marie Hall, Her Mad Hatter
tags: alice, hatter
30 likes
Like

“Life is never going to be smooth sailing, but I've learned to roll with the punches.”
― Marie Hall, A Moment
tags: a-moment, inspiraitional, marie-hall
15 likes
Like

“Writing, to me, is simply thinking through my fingers.”
― Issac Asimov
96 likes
Like

“To live is the rarest thing in the world. Most people exist, that is all.”
― Oscar Wilde
tags: life
76523 likes
Like

“The person, be it gentleman or lady, who has not pleasure in a good novel, must be intolerably stupid.”
― Jane Austen, Northanger Abbey
tags: aliteracy, books, classic, humor
48982 likes
Like

“I would venture to guess that Anon, who wrote so many poems without signing them, was often a woman.”
― Virginia Woolf, A Room of One's Own
tags: women
21031 likes
Like

Kristen Callihan
author of
The Hook Up

Samantha Young
author of
On Dublin...

Thanks Marie for accepting my friend request. Love your books!

Oh thank you so much Sophia! And I love reading book reviews. I'm a writer, but I was a reader first. :)

Yay! Thanks for accepting my friend request, Marie!

I love your books and share similar reading tastes so I look forward to seeing you around on GR.

There are many myths the vikings believed in that I find interesting.It is past Midnight here in Sweden so I fix the list tomorrow.:)I think I'm too tired right now.:)But it's going to be fun writing that list!:))

Oh sooooo cool. I'm happy, happy, happy. I love Viking history, which was why I called my character Tor. :p Cannot wait to hear your notes. :)

I love Vikings!:)I'm very interested in history and I was a history student at Lund's University in 2008-2009.:)The Vikings were a lot more than barbarians that killed and they did not have horns on their helmets.*g*I have a viking book written by a popular Swedish Professor that I can use.:)

Yes absolutely! Also a little bit on your Viking history. Not a lot, but I call him my viking, so I'd like him to feel attached to that part of him. anything helps. :) I am SO excited! :D

Great!:)I will email when I have written down a list.:))Do you want some swedish words too?:))

Oh yay! I'm excited. :) Then maybe it would be easier to swap emails privately mariehallwrites@gmail.com I look forward to hearing your notes on Sweden. :D

Thank you!I want to help if I can!:)I think it is cool if he is from Sweden.:)I will start reading Right Now when I'm done with A Moment.That book is beautiful and I feel connecte withh the character.I started reading it this morning and can't stop thinking about Ryan.Feel so sad for him but I'm sure he will get his happily ever after.:)

Thank you so much, Marie. So glad you enjoyed it. :) Alex's story was just released this past Sunday as well. :D

By the way, I love your hair! Also, I noticed that you're from Sweden, I am currently drafting a character from there, or Norway, I haven't quite decided yet. I introduce him in Right Now, I want to write an authentic character. Any help in popular foods, popular places, books, movies from there, I'd really appreciate it and would be happy to write your name into my dedication page. :) If not, I completely understand. :D

Hi Marie!I read A Moment and I love it!:)It is one of the best New Adult books I have read this year.:))

Hi Susan. :) Kingdom will return early next year! :) So glad you enjoyed them.

I love the Kingdom series...when will we see more? These are a wonderful retelling of some favorite fairy tales...

Josselyn wrote: "thanks for the add. I LOVE the Kingdom series :D right now I'm reading A Moment, so far I'm loving it as well!"

thanks for the add. I LOVE the Kingdom series :D right now I'm reading A Moment, so far I'm loving it as well!

Sara wrote: "Thanks for your friendship, Marie.
I just read your beautiful book "A moment".
God lady, you made me cry, but since it was for such an enchanting book, it's fine. I also wrote a review, but it's in..."

Well, if you can make someone cry happy tears, then I think I've done my job. ;) I do love Ryan, and Alex, and the whole world I wrote about and I'm happy that my love of them translated to you. I'm halfway done with right now and so far am on schedule. I can't wait to release that one either. While it won't be as dark as A Moment, there's a lot of pieces to pick up and that's what I do with Alex. I've enjoyed their story and I thank you for your kind words, it always makes me happy to hear it.

Thanks for your friendship, Marie.
I just read your beautiful book "A moment".
God lady, you made me cry, but since it was for such an enchanting book, it's fine. I also wrote a review, but it's in italian, sorry, it just came out like that. Just think you have readers all over the world!
I can't wait for "Right now"!!!

Hi Ms. L. :) I'm aiming for a late summer release. If you'd like to know more, I update my blog regularly and on it I have a place to sign up for my newsletter. I also like to do giveaways to those that subscribe. :)

Thanks for the add Marie, looking forward to reading your books :). Just out of curiousity, when are you planning to release the next book on Moments Series?