Goodreads helps you follow your favorite authors. Be the first to learn about new releases!
Start by following Douglas Adams.
Follow Author

“I may not have gone where I intended to go, but I think I have ended up where I needed to be.”
― douglas adams, The Long Dark Tea-Time of the Soul
tags: life, navigation
38060 likes
Like
“I love deadlines. I love the whooshing noise they make as they go by.”
― Douglas Adams, The Salmon of Doubt
tags: deadlines, humor, humour, work, writing
31291 likes
Like
“The story so far:
In the beginning the Universe was created.
This has made a lot of people very angry and been widely regarded as a bad move.”
― Douglas Adams, The Restaurant at the End of the Universe

tags: humor, scifi
22265 likes
Like
“I refuse to answer that question on the grounds that I don't know the answer”
― Douglas Adams
tags: attributed-no-source, humor, misattributed-douglas-adams, wit
11095 likes
Like
“For instance, on the planet Earth, man had always assumed that he was more intelligent than dolphins because he had achieved so much—the wheel, New York, wars and so on—whilst all the dolphins had ever done was muck about in the water having a good time. But conversely, the dolphins had always believed that they were far more intelligent than man—for precisely the same reasons.”
― Douglas Adams, The Hitchhiker's Guide to the Galaxy
tags: humour
9699 likes
Like
“There is a theory which states that if ever anyone discovers exactly what the Universe is for and why it is here, it will instantly disappear and be replaced by something even more bizarre and inexplicable.

There is another theory which states that this has already happened.”
― Douglas Adams, The Restaurant at the End of the Universe

tags: arthur-dent
1915 likes
Like
“For a moment, nothing happened. Then, after a second or so, nothing continued to happen.”
― Douglas Adams, The Hitchhiker's Guide to the Galaxy
1836 likes
Like
“I've come up with a set of rules that describe our reactions to technologies:
1. Anything that is in the world when you’re born is normal and ordinary and is just a natural part of the way the world works.
2. Anything that's invented between when you’re fifteen and thirty-five is new and exciting and revolutionary and you can probably get a career in it.
3. Anything invented after you're thirty-five is against the natural order of things.”
― Douglas Adams, The Salmon of Doubt

The Ultimate Hitchhiker's Guide to the Galaxy
285,200 ratings

The Restaurant at the End of the Universe
231,334 ratings

Life, the Universe and Everything
194,597 ratings 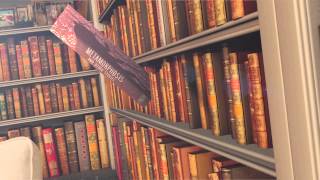