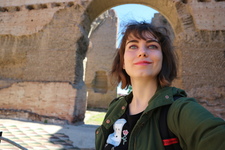 This will prevent Raluca from sending you messages, friend request or from viewing your profile. They will not be notified. Comments on discussion boards from them will be hidden by default.
Sign in to Goodreads to learn more about Raluca.

See all 14 books that Raluca is reading…

“Now Janie ordered a drink and glanced at the bar menu, choosing the goat curry because she'd never had it before.
"You sure about that?" the barman said. He was a boy, really, no more than twenty, with a slim body and huge, laughing eyes. "It's spicy."
"I can take it," she said, smiling at him, wondering if she might pull an adventure out of her hat on her next-to-last night, and what it would be like to touch another body again. But the boy simply nodded and brought her the dish a short time later, not even watching to see how she fared with it.
The goat curry roared in her mouth.
"I'm impressed. I don't think I could eat that stuff," remarked the man sitting two seats down from her. He was somewhere in the midst of middle age, a bust of a man, all chest and shoulders, with a ring of blond, bristling hair circling his head like the laurels of Julius Caesar and a boxer's nose beneath bold, undefeated eyes. He was the only other guest that wasn't with the wedding party. She'd seen him around the hotel and on the beach and had been uninspired by his business magazines, his wedding ring.
She nodded back at him and took an especially large spoonful of curry, feeling the heat oozing from every pore.
"Is it good?"
"It is, actually," she admitted, "in a crazy, burn-your-mouth-out kind of way." She took a sip of the rum and Coke she'd ordered; it was cold and startling after all that fire.
"Yeah?" He looked from her plate to her face. The tops of his cheeks and his head were bright pink, as if he'd flown right up to the sun and gotten away with it. "Mind if I have a taste?"
She stared at him, a bit nonplussed, and shrugged. What the hell.
"Be my guest."
He moved quickly over to the seat next to hers. He picked up her spoon and she watched as it hovered over her plate and then dove down and scooped a mouthful of her curry, depositing between his lips.
"Jee-sus," he said. He downed a glass of water. "Jee-sus Christ." But he was laughing as he said it, and his brown eyes were admiring her frankly over the rim of his water glass. He'd probably noticed her smiling at the bar boy and decided she was up for something.
But was she? She looked at him and saw it all instantaneously: the interest in his eyes, the smooth, easy way he moved his left hand slightly behind the roti basket, temporarily obscuring the finger with the wedding ring.”
― Sharon Guskin, The Forgetting Time

“Denise would never get over it. She knew that. Tommy's bones at the bottom of the well. She and Henry had spent some time with those bones. When the police had finished testing and tagging and photohgraphing them the funeral parlor had given them time before the burial. She'd clutched them to her chest. Run her fingertips along the smooth sockets that had held his shining eyes. There but not there.

Some part of her wanted those bones. Wanted to put the femurs under her pillow at night when she went to sleep. To carry his skull around in her purse so she'd be with him always.

She understood now how people went crazy and did crazy things.”
― Sharon Guskin, The Forgetting Time

“It is very easy to destroy something. And very difficult to repair it again. Magic is much the same way. Magic that destroys and kills is very simple to master. Weak witches who fall victim to the temptations of easy power, therefore, grow lax in their study of true magic. The true magic is the ability to repair. The power to revive. That which calls back joy that has been shattered. That which brings back warmth to love gone cold. […] The world of humanity is full of separation, loss, and mourning. Everyone lives their lives seeking the means to evade or bear that sadness. But for a witch with the power to endlessly regenerate, any concept of destruction or decay no longer applies. The Endless Witch is free of all worldly suffering, certain of eternal bliss.”
― Ryukishi07, Umineko WHEN THEY CRY Episode 3: Banquet of the Golden Witch, Vol. 1
3 likes

“The secret to life is ice cream.”
― Sharon Guskin, The Forgetting Time
1 likes

“This never would have happened in India. In India they understood that life unfolded the way it unfolded, whether you liked it or not: the cow in the road, the swerve that saves or kills you. One life ended, a new one began, maybe it was better than the last one, maybe it wasn't. The Indians (and the Thais, and the Sri Lankans) accepted this the way they accepted monsoons or the heat, with a resignation that was like simple good sense. Damned Americans. Americans, unschooled in the burning dung heaps and the sudden swerves, Americans couldn't help but cling tightly to the life they were living like clutching a spindly branch that was sure to break … and when things didn't go quite as expected, Americans lost their shit. Himself included.”
― Sharon Guskin, The Forgetting Time
1 likes

Ryukishi07
author of: Higurashi When They Cry: Abducted by Demons Arc, Vol. 1

Jonas Jonasson
author of: The Hundred-Year-Old Man Who Climbed Out of the Window and Disappeared

Agatha Christie
author of: And Then There Were None
More…

Polls voted on by Raluca