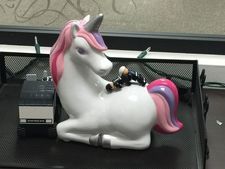 This will prevent Ann from sending you messages, friend request or from viewing your profile. They will not be notified. Comments on discussion boards from them will be hidden by default.
Sign in to Goodreads to learn more about Ann.

“Jay?”
“Yeah?”
“I have something I need to tell you.”
The smile died on his face as he looked at me with solemn eyes. “Yeah?”
“Babe, I think I’m gay.”
He burst into laughter, almost rolling off the bed. “Liam? Guess what? I think I’m gay, too.”
I pretended to mop at the sweat on my brow. “Oh, thank goodness. Because this could’ve been really awkward if you weren’t.”
― Renae Kaye, Loving Jay

“Baltsaros’s face was flushed, his lip curled into a slight sneer as he stared back at Jon. He felt a rush of adrenaline as he realized what the captain wanted from him.

“Hit him again,” Jon said. “And don’t hold back this time.”
― Bey Deckard, Sacrificed: Heart Beyond the Spires

“Aw lovey, yer a fine-lookin’ woman, it’s not that,” Tom said apologetically. “All jokin’ aside, if it ain’t the captain, or it ain’t Jon…” He shrugged again. “There just ain’t anyone else.”
― Bey Deckard, Sacrificed: Heart Beyond the Spires

“You’ll soon run through the whole of the seven dwarfs. You start dating and it’ll be Bashful and Happy you’re imitating. Then you start fucking the guy and you’ll turn into Sleepy. Then it’s just a matter of time before you have a fight and it’ll be Grumpy. Then the relationship will be all over and you’ll be wiser at the end of it
all, just like Doc.”
I shook my head at his convoluted thinking. “What about poor Sneezy?”
Charlie looked at me like I was dumb. “It was an analogy, dude! Work with me here. No analogy is perfect. Just like you’re no Snow White and the poor guy you’re mooning over is no Prince Charming.”
― Renae Kaye, The Blinding Light

“Your helmet is red hot,” Ringil told him. And watched as the man screamed, dropped his ax and grabbed his helm with both hands, screamed again as his fingers touched the metal and melted from the heat, went to his knees still screaming. The skirmish ranger spasmed to the cobbles and thrashed and rolled and arched in agony, scream on scream on scream, until it was done, and finally lay there twitching, eyes poached white in their sockets. Faint steam curled out of the wrenched gape of his mouth, like a soul departing. The cost of it all came and took Gil like a kick in the guts. It was a major effort not to flinch, not to sag in the wake of the forces that had passed through him, not to sit down right there on the cobbled street. He lifted the Ravensfriend instead, trembling fingers clenched once more around the grip. He pointed with the blade at the staring privateers. The voice that grated up out of him seemed to belong to another creature entirely. “Who’s next?” it asked them. They broke and ran. Luckily.”
― Richard K. Morgan, The Dark Defiles
1 likes

T.J. Klune
author of: The House in the Cerulean Sea

N.R. Walker
author of: The Weight of It All

Polls voted on by Ann