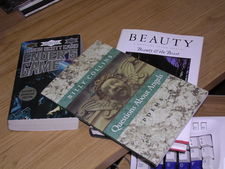 This will prevent E from sending you messages, friend request or from viewing your profile. They will not be notified. Comments on discussion boards from them will be hidden by default.
Sign in to Goodreads to learn more about E.

E is currently reading
A Curious Man: The Strange and Brilliant Life of Robert "Believe It or Not!" Ripley
by Neal Thompson (Goodreads Author)
bookshelves: currently-reading

E is currently reading
The Witch of Lime Street: Séance, Seduction, and Houdini in the Spirit World
by David Jaher
bookshelves: currently-reading

“How easy it was to lie to strangers, to create with strangers the versions of our lives we imagined.”
― Chimamanda Ngozi Adichie, Americanah
203 likes

“Maybe the word hasn’t been invented yet – that thing beyond diversity. We often define movements by what they’re against, but the final goal is greater than the powers it dismantles, deeper than any statistic. It’s something like equity – a commitment to harvesting a narrative language so broad it has no face, no name.”
― Daniel José Older
tags: diversity
11 likes

“Before, she would have said, "I know," that peculiar American expression that professed agreement rather than knowledge”
― Chimamanda Ngozi Adichie, Americanah
7 likes

“Dad says that everyone invented baklava.” It occurs to me now to wonder what that means. Aunt Aya rolls her eyes.
“Your father? He is the worst of the worst. He thinks he cooks and eats Arabic food but these walnuts were not grown from Jordanian earth and this butter was not made from Jordanian lambs. He is eating the shadow of a memory. He cooks to remember but the more he eats, the more he forgets.”
― Diana Abu-Jaber, The Language of Baklava: A Memoir
tags: baking, food, home, lost
4 likes

Robin Gaby Fisher
author of: The Woman Who Wasn't There: The True Story of an Incredible Deception

Lauren Willig
author of: The Secret History of the Pink Carnation

David Liss
author of: A Conspiracy of Paper

Polls voted on by E