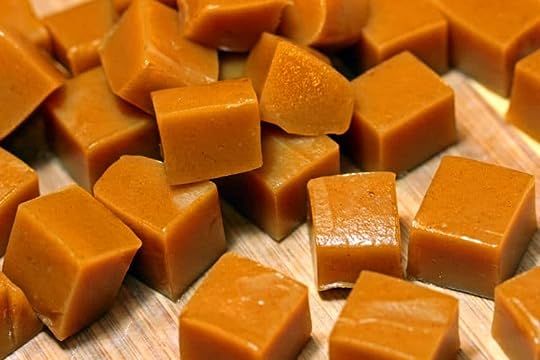 Caramel promotes practicality and helps us feel stable and responsible.

TO PARTICIPATE IN THE JANUARY CHALLENGE:

♦Pairs will be posted on December 21st.

♦Select a series for your partner between December 21st and 24th...sooner is better

Challenge participants are advised to have their GR account set to accept personal messages so the moderator can contact you.

Murder In The Afternoon

Of Murder and Men

A Bibliophile Mystery by Kate Carlisle

I am in again!

Thus Was Adonis Murdered
The Shortest Way to Hades

Death Sits Down to Dinner
A Death by Any Other Name

Here are my choices for January (time sure flies!)

Tree of Life and Death

Don't Let it Snow in Deadwood

Another One Bites the Crust

The Dough Must Go On

I'm back for January

I’m in for January. I’ll need some good holiday reading. I’ll start my December books once I’m on holidays later this week, unless I get called out of town, as they’re audiobooks, and I’ll listen to them while organising things ready for moving house.

I'm in for January. Here are my picks:

I'm in again here are my choices for this month:

Cat in the Stacks - Miranda James

I'm in. These are all new to me.
Jenn McKinlay Library Lovers
Books Can Be Deceiving, Due or Die

Marty Wingate Birds of a Feather
The Rhyme of the Magpie, Empty Nest

Sherry Thomas Lady Sherlock
A Study in Scarlet Women, A Conspiracy in Belgravia

I'm in. My theme for this month is "New Year, New Series." Each of the selections below is a new (to me) series from an author whose books I have enjoyed reading. All books listed are #1 and #2 in the respective series:

Evening all,
I am in and here they are
Charlotte and Thomas Pitt mysteries by Anne Perry

Mod
Welcome to the Serial Reader Challenge everyone. Pairs are posted here. Please pick a series for your partner.

Have a cozy holiday season!

Hi, Vittoria. What tough choices you have! But I can't find A Book Collector Mystery -- Victoria Abbott at my library, so I'm picking that series for you. Tell me if you like it and I'll recommend it for purchase.

Gary wrote: "I'm back for January

Some great choices there Gary - but as January tends to be cold and miserable I thought Aloha Lagoon could be a good place to visit - enjoy!

Louise, I pick for you Ghost-in-Law series! Happy Reading and Merry Christmas!

Susan I pick for you The Gaslight Mysteries. Enjoy. Merry Christmas

Sharon, I choose Hampton Homes for you. It’s on my next-up list as well!

Marina, I'm not familiar with your series so I'm picking Oceanside Cozy Mystery Series by Susan Gillard because I love the covers!

Thanks, Jennifer. I'm looking forward to it.


Wow, Pat! You have some excellent choices here. I love James Patterson and am at least halfway through each of the series you posted! I’m going to select the Michael Bennett series for you. If I remember correctly, the first book is a great intro to the series. Hope you enjoy the books, and Happy Holidays!

Marianne wrote: "I'm in again here are my choices for this month:

Marianne,
I am not familiar with any of the series you chose but I am most interested in the Baker Street Cozy Mystery series so that is what I pick for you. Happy reading and Happy Holiday!

Connie N. wrote: "Marina, I'm not familiar with your series so I'm picking Oceanside Cozy Mystery Series by Susan Gillard because I love the covers!"

Connie,
Thanks for selecting that series. I am very excited to start this series! There are over 50 books in the series so I have lots to read. Happy holidays!!

Hello Helen,
I pick for you Tamar Myers' Den of Antiquity.
Enjoy and Happy Holidays!!
P.S. I wish you all the best with your move.

I pick the Donut Shop series for you. Enjoy!! Happy Holidays

Always fun to visit Aloha Lagoon and its cousin Danger Cove. Thanks for the choice. Have a Merry Christmas.

Wow I get to choose for our fearless leader. Nell you have some really good choices. I have been looking to start the Luke Thanet series myself, but I also enjoyed the first of the Kincaid and James series. I have been meaning to get to book 2 forever.

I will pick for you the Kincaid and James series. If you want to buddy read the first Thanet novel let me know.

Thank you Anne! I need to make headway on that series.

Mod
Thanks Gary. I've been meaning to start the Deborah Crombie series for ages!

Hilary, I choose Cat Latimer for you!

Merry Christmas to you and yours!

Cynthia wrote: "Hello Helen,
I pick for you Tamar Myers' Den of Antiquity.
Enjoy and Happy Holidays!!
P.S. I wish you all the best with your move."

Thank you Cynthia. Move won’t happen until February, but I’ll be away most of January, so I’m doing preparatory decluttering now.
I’m looking forward to getting back to that series, as I’ve had them waiting on my shelves for a while.

Barbara wrote: "I'm in. My theme for this month is "New Year, New Series." Each of the selections below is a new (to me) series from an author whose books I have enjoyed reading. All books listed are #1 and #2 in ..."
Barbara, they’re all series new to me too. I’m choosing the Library Lovers mysteries for you.

Meg wrote: "Hilary, I choose Cat Latimer for you!

Merry Christmas to you and yours!"

Thank you Meg, I have been meaning to get back to these for a while!

Solstice Greetings back to you and yours!

Morning Michelle,
I pick for you the Kelly Jackson mysteries. Sounds like a nice place. Merry Christmas.

Thank you Susan. This will be a new series for me! Merry Christmas!

Lori wrote: "I just joined this group and this challenge sounds like a lot of fun.
Here are my choices for January:

A Book Collector Mystery by Victoria Abbott:
The Christie Curse
The Sawyer’s Swindle


Very good authors you have chosen but I chose for you Victoria Abbott the Book Collector mysteries.


Thanks Barbara! I have those books are audio and I cannot wait to start.