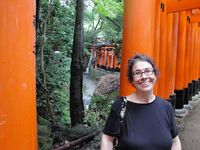 Born
The United States
Website
http://www.wenspencer.com/
Twitter
WenSpencer
Genre
Science Fiction & Fantasy
Member Since
May 2011
edit data
John W. Campbell Award Winner Wen Spencer resides in paradise in Hilo, Hawaii with two volcanoes overlooking her home. Spencer says that she often wakes up and exclaims "Oh my god, I live on an island in the middle of the Pacific!" This, says Spencer, is a far cry from her twenty years of living in land-locked Pittsburgh.

The Elfhome series opener, Tinker, won the 2003 Sapphire Award for Best Science Fiction Romance and was a finalist for the Romantic Times Reviewers' Choice Award for Fantasy Novel. Wolf Who Rules, the sequel to Tinker, was chosen as a Top Pick by Romantic Times and given their top rating of four and a half stars. Other Baen books include space opera thriller Endless Blue and Eight Million Gods.

Of my own stuff, Joshua and Decker, Olivia and Forest Moss, Jane and Hal, Louise and Jillian... Okay, I like most of my characters. (less)
flag
See all 8 answers from Wen Spencer…

Check out my Patreon page

I've always wanted to do special things for my fans, but generally the costs are prohibitive. Commissioning art, printing, postage, it all adds up.

I've also wanted to have a more meaningful engagement with my fans. Something more personal than snippets on Facebook or a tweet.

“I can build a hyperphase jump gate, I'm sure I could have figured sex out. Insert Tab M into Slot F. Repeat until done.”
― Wen Spencer, Wolf Who Rules
19 likes
Like

“Well it's like eating at my mom's you get what's being served and if you don't like it they still make you eat it”
― Wen Spencer, Steel City Magic
10 likes
Like

SEPTEMBER Science Fiction: This poll decides which two books will go into the run off poll for the September sci fi BOTM.

“Are you some kind of tree police?” Joshua asked without opening his eyes. “Do you feel as if you have some kind of civic duty to come out here and—and—annoy the hell out of me?”
“Well—yes—I do have a civic duty to stop you—that is—if you needed stopping. If you’d kept to simple tree assault, I would have just kept watching. It was fairly entertaining, in a train wreck kind of way. You’ve moved up to tree homicide.”
“Homicide?” Joshua opened his eyes to give the man an annoyed glare. “That implies intent. At most, this is tree slaughter. Maybe even just reckless endangerment—it might not be dead.”
They eyed the tree in silence. His kick had sheered the tree trunk off five inches from the roots, leaving behind a jagged white stump, flowing with sap.
“No, that’s dead,” the man said.
“Yeah.” Joshua had to agree. It occurred to Joshua that this person might be undercover cop or some off-duty park ranger or a very lost Canadian Mountie or something. He’d seen Joshua destroy a piece of public property worth hundreds of dollars. The man might try to arrest him. That wouldn’t end well for either one of them.”
― Wen Spencer, The Black Wolves of Boston
tags: humor
2 likes
Like

“It was comforting for only a moment. Then Joshua realized that the dude still had a seriously huge knife in his hand.
The part of him that was crying like a kicked puppy took off running. Unfortunately it took the rest of him with it.
“No! Nononono!” He cried even as he bolted. This was what scared him about being a werewolf. He wasn’t in control of his body anymore. Because of his last name and small size, he’d always been a target of bullies. He’d learned early that they could hurt him but they couldn’t control him if he didn’t let them. And then he learned martial arts and they couldn’t even hurt him anymore. In the last twenty-four hours, it had been as if he was strapped into a rollercoaster: all he could do was go for the ride and scream a lot.”
― Wen Spencer, The Black Wolves of Boston
tags: humor, truth
1 likes
Like

“He knew nothing about werewolves but what was in the movies. He hadn’t even believed they existed until he was attacked. The tall dude, though, knew.
Joshua managed to force his body to make a left-hand turn at the corner, and again once he was across the street, and then a third time. He came looping past the Kitchen Kitsch where the tall dude was standing in the hole in the wall.
“You’re really conflicted about this running away part, aren’t you?” the dude said as Joshua dashed past him.
“Yes!” He tried to put on the brakes but his body kept running. He could smell his own blood on the man and his body wanted nothing to do with that.
The dude wasn’t standing in the hole as Joshua came looping back toward the Kitchen Kitsch a second time. Joshua was afraid he’d lost the man. He was so focused on the opposite side of the street that he nearly ran into the glass door that opened out in front of him. A hand caught him, jerking him into the building.”
― Wen Spencer, The Black Wolves of Boston
tags: humor
1 likes
Like

Mahalo nui loa for accepting my friend request, and for the marvelous worlds you craft for us to vacation in.