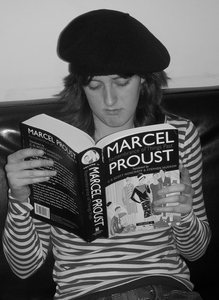 This will prevent Abi from sending you messages, friend request or from viewing your profile. They will not be notified. Comments on discussion boards from them will be hidden by default.
Sign in to Goodreads to learn more about Abi.

“But to ask pity of our body is like discoursing in front of an octopus, for which our words can have no more meaning than the sound of the tides, and with which we should be appalled to find ourselves condemned to live.”
― Marcel Proust, The Guermantes Way
8 likes

“Nor did these society people add to Elstir's work in their mind's eye that temporal perspective which enabled them to like, or at least to look without discomfort at, Chardin's painting. And yet the older among them might have reminded themselves that in the course of their lives they had gradually seen, as the years bore them away from it, the unbridgeable gulf between what they considered a masterpiece by Ingres and what they had supposed must forever remain a "horror" (Manet's Olympia, for example) shrink until the two canvases seemed like twins. But we never learn, because we lack the wisdom to work backwards from the particular to the general, and imagine ourselves always to be faced with an experience which has no precedents in the past.”
― Marcel Proust, The Guermantes Way
2 likes

“Do you suppose that it is within your power to insult me? You evidently are not aware to whom you are speaking? Do you imagine that the envenomed spittle of five hundred little gentlemen of your type, heaped one upon another, would succeed in slobbering so much as the tips of my august toes?”
― Marcel Proust
18 likes

“The farm brook ran down from the mountain in a straight line for the fold then swerved to the west to go its way down into the marshes. There were two knee-high falls in it and two pools, knee-deep. At the bottom there was shingle, pebbles and sand. It ran in many curves. Each curve had its own tone, but not one of them was dull; the brook was merry and music-loving, like youth, but yet with various strings, and it played its music without thought of any audience and did not care though no one heard for a hundred years, like the true poet.”
― Halldór Laxness, Independent People
9 likes

Story of a Journey by Benedikt Gröndal (Literature & Fiction)
1 chapters   —   updated Feb 28, 2012 08:00AM
Description: This is <b>not</b> my own story. It is, however, my original translation from the Icelandic of a work that is available in the public domain. The story is called <i>Ferðasaga</i> (<i>Story of a Journey</i>) and it's by Benedikt Gröndal, an Icelandic author who lived from 1826 - 1907. It is a very odd work, not the sort of thing you'd perhaps expect from the 19th century, and I hope I've done it some sort of justice in my translation. If any Icelanders chance to read this and notice errors that I may have made, then please tell me. The original story can be found here: http://www.snerpa.is/net/sma/ferdasag.htm

Aleksandr Solzhenitsyn
author of: One Day in the Life of Ivan Denisovich

William Blake
author of: Songs of Innocence and of Experience
More…

Polls voted on by Abi