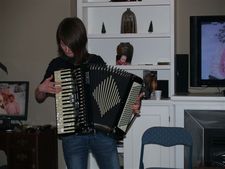 “I looked at my palms trying to see the other life, the parallel life. The point at which my selves broke away and one married a fat man and the other stayed here.”
― Jeanette Winterson, The Passion
14 likes

“The body shuts down when it has too much to bear; goes its own way quietly inside, waiting for a better time, leaving you numb and half alive.”
― Jeanette Winterson, The Passion
501 likes

“I have a theory that every time you make an important choice, the part of you left behind continues the other life you could have had.”
― Jeanette Winterson, Oranges Are Not the Only Fruit
621 likes

“There are many forms of love and affection, some people can spend their whole lives together without knowing each other's names. Naming is a difficult and time-consuming process; it concerns essences, and it means power. But on the wild nights who can call you home? Only the one who knows your name.”
― Jeanette Winterson, Oranges Are Not the Only Fruit
tags: love
322 likes

“Since I was a small girl, I have lived inside this cottage, shelted by its roof and walls. I have known of people suffering—I have not been blind to them in the way that privilege allows, the way my own husband and now my daughter are blind. It is a statement of fact and not a judgement to say Charlie and Ella’s minds aren’t oriented in that direction; in a way, it absolves them, whereas the unlucky have knocked on the door of my consciousness, they have emerged from the forest and knocked many times over the course of my life, and I have only occasionally allowed them entry. I’ve done more than nothing and much less than I could have. I have laid inside, beneath a quilt on a comfortable couch, in a kind of reverie, and when I heard the unlucky outside my cottage, sometimes I passed them coins or scraps of food, and sometimes I ignored them altogether; if I ignored them, they had no choice but to walk back into the woods, and when they grew weak or got lost or were circled by wolves, I pretended I couldn’t hear them calling my name.”
― Curtis Sittenfeld, American Wife
tags: community, empathy, ethics, politics
3 likes

Jeanette Winterson
author of: Oranges Are Not the Only Fruit