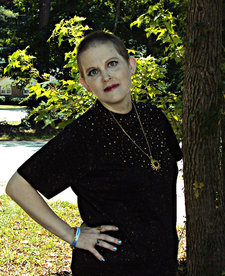 This will prevent Katy from sending you messages, friend request or from viewing your profile. They will not be notified. Comments on discussion boards from them will be hidden by default.
Sign in to Goodreads to learn more about Katy.

“Aim for their power lines! They’re the devil’s veins and electricity is his blood.”   – Futurama”
― Eirik Gumeny, High Voltage
0 likes

“But who knows when night’s going to fall anyway.” “Well, you should. Shouldn’t you?” “No, why would I –” “Isn’t that part of your job?” “Knowing in intimate detail the prerogatives of a fickle and broken sky?” “Yes.” “You are aware that even professional astronomers and astrophysicists are unable to explain why the atmosphere changes colors at random and why the sun can rise and set three times in an hour and why we haven’t all just died already, right?” “Yes.” “But you still think I have the answer to that universal mystery. Because I work for a Holiday Inn.” “Yes.” “You’re kind of special, aren’t you?” “That’s what my mommy likes to say.” “I’m gonna... go now. I’ve got... towels.” Catrina”
― Eirik Gumeny, High Voltage
0 likes

“Timmy was a chemically-enhanced, telepathic squirrel. As such, he not only enjoyed himself some peanut butter, but he understood that he enjoyed himself some peanut butter and knew how to go about getting more peanut butter so that he could continue to keep enjoying said peanut butter. Lately however, he had been enjoying the nut spread too much. Well, no. Timmy hadn’t enjoyed it in weeks. He just needed it. On a scary, compulsive level. To be fair, this unquenchable desire wasn’t entirely Timmy’s fault. Six months earlier, Nikola Tesla’s earthquake machine nearly broke the world in half. While the doomsday device was stopped before it could permanently scar the planet too much, one of the many other consequences of the day was that an offshore peanut butter processing facility got tossed around pretty hard, and the managing company’s nicotine and heroin processing operations got mixed up with the peanut butter. Consolidated Phukital, the company in question, did some quick and questionable math, decided the nicotine and heroin levels in the peanut butter weren’t high enough to be of concern, and shipped the tainted product off to their customers.”
― Eirik Gumeny, High Voltage
0 likes

“The olive-skinned young man of Turkish origins pointed his good hand toward the ceiling, specifically toward the flag of the Confederated Hillpersons of Whitesylvania flapping from the rafters.”
― Eirik Gumeny, High Voltage
0 likes

“Shortly after incorporating, the settlement of Whitesylvania seceded from the country’s government with little to no opposition. The populace knew secession was a terrible idea and that it would leave the racist dickheads vulnerable and desperate, but allowed it all the same, because, as per the official ballot, “Fuck Whitesylvania.” Sadly, though, the colony of prejudiced douchebags thrived – although, in this case, “thrived” meant “thanks to the inbreeding and diseases they still carried from Old Maryland, degenerated into a shambling collective of drooling, subhuman shitheads that literally shared one mind.”
― Eirik Gumeny, High Voltage
0 likes

Amalie Howard
author of: The Beast of Beswick

Anthony Miller
author of: What Would Satan Do?

Marshall A. Miller
author of: Daughter of Dreams

Lisa Olsen
author of: Wake Me When the Sun Goes Down

Polls voted on by Katy