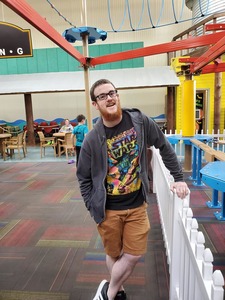 This will prevent Kyle from sending you messages, friend request or from viewing your profile. They will not be notified. Comments on discussion boards from them will be hidden by default.
Sign in to Goodreads to learn more about Kyle.

See all 88 books that Kyle is reading…

“Grief reunites you with what you've lost. It's a merging; you go with the loved thing or person that's going away. You follow it a far as you can go.

But finally,the grief goes away and you phase back into the world. Without him.

And you can accept that. What the hell choice is there? You cry, you continue to cry, because you don't ever completely come back from where you went with him -- a fragment broken off your pulsing, pumping heart is there still. A cut that never heals.

And if, when it happens to you over and over again in life, too much of your heart does finally go away, then you can't feel grief any more. And then you yourself are ready to die. You'll walk up the inclined ladder and someone else will remain behind grieving for you.”
― Philip K. Dick, Flow My Tears, the Policeman Said

“Those children are right," he would have said. "They stole nothing from you, my dear. These things don't belong to you here, you now. They belonged to her, that other you, so long ago."
Oh, thought Mrs. Bentley. And then, as though an ancient phonograph record had been set hissing under a steel needle, she remembered a conversation she had once had with Mr. Bentley--Mr. Bentley, so prim, a pink carnation in his whisk-broomed lapel, saying, "My dear, you never will understand time, will you? You've always trying to be the things you were, instead of the person you are tonight. Why do you save those ticket stubs and theater programs? They'll only hurt you later. Throw them away, my dear."
But Mrs. Bentley had stubbornly kept them.
"It won't work," Mr. Bentley continued, sipping his tea. "No matter how hard you try to be what you once were, you can only be what you are here and now. Time hypnotizes. When you're nine, you think you've always been nine years old and will always be. When you're thirty, it seems you've always been balanced there on that bright rim of middle life. And then when you turn seventy, you are always and forever seventy. You're in the present, you're trapped in a young now or an old now, but there is no other now to be seen."
It had been one of the few, but gentle, disputes of their quiet marriage. He had never approved of her bric-a-brackery. "Be what you are, bury what you are not," he had said. "Ticket stubs are trickery. Saving things is a magic trick, with mirrors."
If he were alive tonight, what would he say?
"You're saving cocoons." That's what he'd say. "Corsets, in a way, you can never fit again. So why save them? You can't really prove you were ever young. Pictures? No, they lie. You're not the picture."
"Affidavits?"
No, my dear, you are not the dates, or the ink, or the paper. You're not these trunks of junk and dust. You're only you, here, now--the present you."
Mrs. Bentley nodded at the memory, breathing easier.
"Yes, I see. I see."
The gold-feruled cane lay silently on the moonlit rug.
"In the morning," she said to it, "I will do something final about this, and settle down to being only me, and nobody else from any other year. Yes, that's what I'll do."
She slept . . .”
― Ray Bradbury, Dandelion Wine

“Adults...struggle desperately with fiction, demanding constantly that it conform to the rules of everyday life. Adults foolishly demand to know how Superman can possibly fly, or how Batman can possibly run a multibillion-dollar business empire during the day and fight crime at night, when the answer is obvious even to the smallest child: because it's not real.”
― Grant Morrison, Supergods: What Masked Vigilantes, Miraculous Mutants, and a Sun God from Smallville Can Teach Us About Being Human
tags: adults, batman, children, comics, fiction, literature, reality, superheroes, superman
289 likes

“America is the wealthiest nation on Earth, but its people are mainly poor, and poor Americans are urged to hate themselves. To quote the American humorist Kin Hubbard, 'It ain’t no disgrace to be poor, but it might as well be.' It is in fact a crime for an American to be poor, even though America is a nation of poor. Every other nation has folk traditions of men who were poor but extremely wise and virtuous, and therefore more estimable than anyone with power and gold. No such tales are told by the American poor. They mock themselves and glorify their betters. The meanest eating or drinking establishment, owned by a man who is himself poor, is very likely to have a sign on its wall asking this cruel question: 'if you’re so smart, why ain’t you rich?' There will also be an American flag no larger than a child’s hand – glued to a lollipop stick and flying from the cash register.

Americans, like human beings everywhere, believe many things that are obviously untrue. Their most destructive untruth is that it is very easy for any American to make money. They will not acknowledge how in fact hard money is to come by, and, therefore, those who have no money blame and blame and blame themselves. This inward blame has been a treasure for the rich and powerful, who have had to do less for their poor, publicly and privately, than any other ruling class since, say Napoleonic times. Many novelties have come from America. The most startling of these, a thing without precedent, is a mass of undignified poor. They do not love one another because they do not love themselves.”
― Kurt Vonnegut, Slaughterhouse-Five
tags: america, disgrace, inequality, love, poor
1317 likes

“Genuinely social people never ceased to amaze him. Their brains seemed to generate an inexhaustible fund of things to say, naturally, with no effort, out of nothing at all.”
― Lev Grossman, The Magician King
57 likes

Polls voted on by Kyle