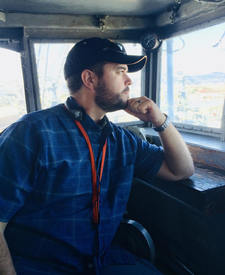 This will prevent Justin from sending you messages, friend request or from viewing your profile. They will not be notified. Comments on discussion boards from them will be hidden by default.
Sign in to Goodreads to learn more about Justin.

See all 4 books that Justin is reading…

“For I am Saruman the Wise, Saruman Ring-maker, Saruman of Many Colours!'

I looked then and saw that his robes, which had seemed white, were not so, but were woven of all colours, and if he moved they shimmered and changed hue so that the eye was bewildered.

I liked white better,' I said.

White!' he sneered. 'It serves as a beginning. White cloth may be dyed. The white page can be overwritten; and the white light can be broken.'

In which case it is no longer white,' said I. 'And he that breaks a thing to find out what it is has left the path of wisdom.' - Gandalf”
― J.R.R. Tolkien

“The line between moral behavior and narcissistic self-righteousness is thin and difficult to discern. The man who stands before a crowd and proclaims his intention to save the seas is convinced that he is superior to a man who merely picks up his own and other people’s litter on the beach, when in fact the latter is in some small way sure to make the world a better place, while the former is likely to be a monster of vanity whose crusade will lead to unintended destruction.”
― Dean Koontz, Deeply Odd
tags: morality
10 likes

Polls voted on by Justin