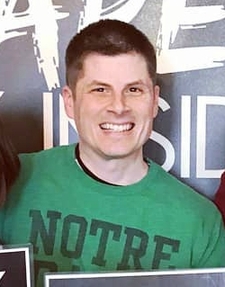 This will prevent Jude from sending you messages, friend request or from viewing your profile. They will not be notified. Comments on discussion boards from them will be hidden by default.
Sign in to Goodreads to learn more about Jude.

Jude is currently reading
Shake Down the Thunder: The Creation of Notre Dame Football
by Murray A. Sperber
bookshelves: currently-reading

See all 10 books that Jude is reading…

“A genuine primary is a fight within the family of the party - and, like any family fight, is apt to be more bitter and leave more enduring wounds than battle with the November enemy.”
― Theodore H. White, The Making of the President 1960
2 likes

“Every American election summons the individual voter to weigh the past against the future.”
― Theodore H. White, The Making of the President 1960
4 likes

“In the next 25 years, we will see a 100 percent increase in the number of American retirees. The number of workers, however, will increase by only 15 percent. Given those numbers, how can these programs survive? Under our current tax code, these programs can be maintained only by increasing the tax on those who work, reducing benefits for those who have retired or by increasing the age of retirement.”
― John Linder, The Fair Tax Book: Saying Goodbye to the Income Tax and the IRS
1 likes

“The 'smoke-filled room' as political reality is now as dead as Prohibition.”
― Theodore H. White, The Making of the President 1960
2 likes

“When it first emerged, Twitter was widely derided as a frivolous distraction that was mostly good for telling your friends what you had for breakfast. Now it is being used to organize and share news about the Iranian political protests, to provide customer support for large corporations, to share interesting news items, and a thousand other applications that did not occur to the founders when they dreamed up the service in 2006. This is not just a case of cultural exaptation: people finding a new use for a tool designed to do something else. In Twitter's case, the users have been redesigning the tool itself. The convention of replying to another user with the @ symbol was spontaneously invented by the Twitter user base. Early Twitter users ported over a convention from the IRC messaging platform and began grouping a topic or event by the "hash-tag" as in "#30Rock" or "inauguration." The ability to search a live stream of tweets - which is likely to prove crucial to Twitter's ultimate business model, thanks to its advertising potential - was developed by another start-up altogether. Thanks to these innovations, following a live feed of tweets about an event - political debates or Lost episodes - has become a central part of the Twitter experience. But for the first year of Twitter's existence, that mode of interaction would have been technically impossible using Twitter. It's like inventing a toaster oven and then looking around a year later and discovering that all your customers have, on their own, figured out a way to turn it into a microwave.”
― Steven Johnson, Where Good Ideas Come from: The Natural History of Innovation
14 likes

Daniel H. Pink
author of: Drive: The Surprising Truth About What Motivates Us
More…

Polls voted on by Jude