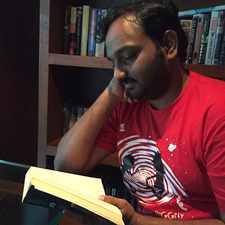 This will prevent Ram from sending you messages, friend request or from viewing your profile. They will not be notified. Comments on discussion boards from them will be hidden by default.
Sign in to Goodreads to learn more about Ram.

Nine Rupees an Hour: Disappearing Livelihoods of Tamil Nadu by Aparna Karthikeyan
1 note & 3 highlights
occasionally hitting the hot metal too.
He he

“There is a distinct difference between "suspense" and "surprise," and yet many pictures continually confuse the two. I'll explain what I mean.

We are now having a very innocent little chat. Let's suppose that there is a bomb underneath this table between us. Nothing happens, and then all of a sudden, "Boom!" There is an explosion. The public is surprised, but prior to this surprise, it has seen an absolutely ordinary scene, of no special consequence. Now, let us take a suspense situation. The bomb is underneath the table and the public knows it, probably because they have seen the anarchist place it there. The public is aware the bomb is going to explode at one o'clock and there is a clock in the decor. The public can see that it is a quarter to one. In these conditions, the same innocuous conversation becomes fascinating because the public is participating in the scene. The audience is longing to warn the characters on the screen: "You shouldn't be talking about such trivial matters. There is a bomb beneath you and it is about to explode!"

In the first case we have given the public fifteen seconds of surprise at the moment of the explosion. In the second we have provided them with fifteen minutes of suspense. The conclusion is that whenever possible the public must be informed. Except when the surprise is a twist, that is, when the unexpected ending is, in itself, the highlight of the story.”
― Alfred Hitchcock

“What do we say to the Lord of Death?'

“You know, one of the tragedies of real life is that there is no background music.”
― Annie Proulx
4657 likes

Polls voted on by Ram