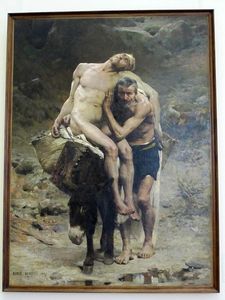 This will prevent Bryan from sending you messages, friend request or from viewing your profile. They will not be notified. Comments on discussion boards from them will be hidden by default.
Sign in to Goodreads to learn more about Bryan.

Bryan Lowe is currently reading
Thoughts from the Diary of a Desperate Man: A Daily Devotional
by Walter A. Henrichsen
bookshelves: currently-reading

“Eventually I became a tad compulsive about hearing certain songs. At first it was a handful of jazz classics—Miles Davis’s “Freddie Freeloader,” John Coltrane’s “My Favorite Things,” Frank Sinatra’s “Luck Be a Lady.” (Before one primary debate, I must have played that last track two or three times in a row, clearly indicating a lack of confidence in my preparations.)”
― Barack Obama, A Promised Land
1 likes

“People in a cult don't know they're in a cult. But everyone else can tell.”
― Oliver Markus Malloy, Inside The Mind of an Introvert
tags: cult, cults, cults-of-personality, maga-death-cult, qanon, quotes-about-cults, trump-quotes, trumpism, twitter-quotes
1 likes

“What I do know with unwavering certainty is the heart of the father. It is a heart of limitless mercy.”
― Henri J.M. Nouwen, The Return of the Prodigal Son: A Story of Homecoming
2 likes

“One of the main reasons I remain a Christian is because I love knowing that my sins are not only forgiven, but also forgotten!”
― Tony Campolo, Why I Left, Why I Stayed: Conversations on Christianity Between an Evangelical Father and His Humanist Son
2 likes

“We overcome, not because we’re a moral majority or a righteous remnant, but because we’re blood-covered sinners who know that if the gospel can change us, it can change anyone.”
― Russell D. Moore, Onward: Engaging the Culture without Losing the Gospel
5 likes

Polls voted on by Bryan