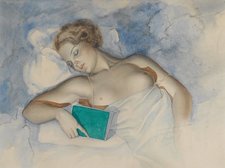 This will prevent Violeta from sending you messages, friend request or from viewing your profile. They will not be notified. Comments on discussion boards from them will be hidden by default.
Sign in to Goodreads to learn more about Violeta .

“How do you control your telekinesis while intimate with your mate?"

"I broke a damn lot of furniture at the start, including two beds." A curious glance. "What are you doing?"

"Traveling around the world.”
― Nalini Singh, Shield of Winter

“… a son?”
“Yes. A son.”
All of a sudden, he felt the biggest, widest, happiest grin hit his face, the goddamn thing stretching his cheeks until they hurt, making his eyes water from the strain, pulling at his temples until they burned. And the joy wasn’t just on his puss. A flush so great it burned him alive flooded through his body, cleansing him in places he didn’t know were dirty, washing out cobwebs that had crept into his corners, making him feel alive in a way he hadn’t been in a very, very long time.”
― Ward J. R.
tags: beth, wrath
3 likes

“There was a sniffle from the crowd. At which point, Rhage’s voice hissed, “What. This is beautiful, ’kay? Fuck all y’all.”
― J.R. Ward, The King
80 likes

Let's Talk About Julie Garwood — 361 members — last activity Nov 28, 2017 01:04AM
For fans of romance writer, Julie Garwood. If you love her historicals or her contemporaries, then come on in and have fun.

Historical Romance with Children in the plot

Polls voted on by Violeta