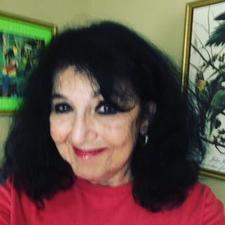 This will prevent Barbara from sending you messages, friend request or from viewing your profile. They will not be notified. Comments on discussion boards from them will be hidden by default.
Sign in to Goodreads to learn more about Barbara.

“It’s a widely known fact that most moms are ready to kill someone by eight thirty A.M. on any given morning. On the particular morning of Tuesday, October eighth, I was ready by seven forty-five. If you’ve never had to wrestle a two-year-old slathered in maple syrup into a diaper while your four-year-old decides to give herself a haircut in time for preschool, all while trying to track down the whereabouts of your missing nanny as you sop up coffee grounds from an overflowing pot because in your sleep-deprived fog you forgot to put in the filter, let me spell it out for you.

I was ready to kill someone. I didn’t really care who.”
― Elle Cosimano, Finlay Donovan Is Killing It

“Life has no remote....get up and change it yourself!”
― Mark A. Cooper, Operation Einstein
tags: confidence, inspirational, inspirational-attitude, life, life-philosophy, optimism, power-of-words
2462 likes

Polls voted on by Barbara