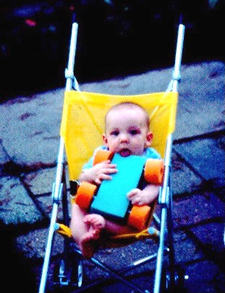 “Until a man is twenty-five, he still thinks, every so often, that under the right circumstances he could be the baddest motherfucker in the world. If I moved to a martial-arts monastery in China and studied real hard for ten years. If my family was wiped out by Colombian drug dealers and I swore myself to revenge. If I got a fatal disease, had one year to live, and devoted it to wiping out street crime. If I just dropped out and devoted my life to being bad.”
― Neal Stephenson
tags: bad, bad-guy, bad-person, crime, humor, motherfucker, revenge
607 likes

“For instance, on the planet Earth, man had always assumed that he was more intelligent than dolphins because he had achieved so much—the wheel, New York, wars and so on—whilst all the dolphins had ever done was muck about in the water having a good time. But conversely, the dolphins had always believed that they were far more intelligent than man—for precisely the same reasons.”
― Douglas Adams, The Hitchhiker's Guide to the Galaxy
tags: humour
9821 likes

“The fact that we live at the bottom of a deep gravity well, on the surface of a gas covered planet going around a nuclear fireball 90 million miles away and think this to be normal is obviously some indication of how skewed our perspective tends to be.”
― Douglas Adams, The Salmon of Doubt: Hitchhiking the Galaxy One Last Time
tags: humor, perspective, science
5700 likes

“Let's set the existence-of-God issue aside for a later volume, and just stipulate that in some way, self-replicating organisms came into existence on this planet and immediately began trying to get rid of each other, either by spamming their environments with rough copies of themselves, or by more direct means which hardly need to be belabored. Most of them failed, and their genetic legacy was erased from the universe forever, but a few found some way to survive and to propagate.”
― Neal Stephenson, Cryptonomicon
58 likes