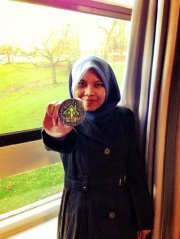 This will prevent Rinie from sending you messages, friend request or from viewing your profile. They will not be notified. Comments on discussion boards from them will be hidden by default.
Sign in to Goodreads to learn more about Rinie.

“Augustus Waters was a self-aggrandizing bastard. But we forgive him. We forgive him not because he had a heart as figuratively good as his literal one sucked, or because he knew more about how to hold a cigarette than any nonsmoker in history, or because he got eighteen years when he should've gotten more.'
'Seventeen,' Gus corrected.
'I'm assuming you've got some time, you interupting bastard.
'I'm telling you,' Isaac continued, 'Augustus Waters talked so much that he'd interupt you at his own funeral. And he was pretentious: Sweet Jesus Christ, that kid never took a piss without pondering the abundant metaphorical resonances of human waste production. And he was vain: I do not believe I have ever met a more physically attractive person who was more acutely aware of his own physical attractiveness.
'But I will say this: When the scientists of the future show up at my house with robot eyes and they tell me to try them on, I will tell the scientists to screw off, because I do not want to see a world without him.'
I was kind of crying by then.”
― John Green, The Fault in Our Stars

“Some infinities are bigger than other infinities.”
― John Green, The Fault in Our Stars
tags: infinity, john-green, life, tfios, the-fault-in-our-stars
20898 likes

“The world is not a wish-granting factory.”
― John Green, The Fault in Our Stars
12058 likes

“When everything goes to hell, the people who stand by you without flinching -- they are your family. ”
― Jim Butcher
tags: family
2855 likes

“There are infinite numbers between 0 and 1. There's .1 and .12 and .112 and an infinite collection of others. Of course, there is a bigger infinite set of numbers between 0 and 2, or between 0 and a million. Some infinities are bigger than other infinities. A writer we used to like taught us that. There are days, many of them, when I resent the size of my unbounded set. I want more numbers than I'm likely to get, and God, I want more numbers for Augustus Waters than he got. But, Gus, my love, I cannot tell you how thankful I am for our little infinity. I wouldn't trade it for the world. You gave me a forever within the numbered days, and I'm grateful.”
― John Green, The Fault in Our Stars
tags: infinity
16507 likes

Sophie Kinsella
author of: Confessions of a Shopaholic
More…

Polls voted on by Rinie