And so we approach the middle of the year. What are you reading?

For now I think that's enough to start the month.

Mod
Too many book clubs Kim, and none that meet IRL.

I'm going to start with Love in the Years of Lunacy, Railsea, All That I Am and Empire State

And for my book clubs, I've only got The Grifters to read.

I've just finished reading White Oleander by Janet Fitch and I'm about to start The Lucky One by Nicholas Sparks.

Just finished The Heart is a Lonely Hunter and am starting The Woman in Black today. After that, I'll get to some of the monthly book club reads.

I loved The heart is a lonely hunter, Franky.Very insightful.
Its summer vacaaion for us here,so I've been reading quite a lot. I finished 'Fer-de-lance'and 'Three doors to death' by Rex Stout. Then a completely differrent book, 'A pale view of the hills' by Kazuo Ishiguro.I started 'The engineer of human souls' by Josef Skvorecky but got bogged down after the first chapter. Now i am reading 'The file on H' by Ismail Kadare. Its very different,about Albania and living tradition of singing epic songs.

I will be reading The Picture of Dorian Grayand Jane Eyrefor book clubs, I also want to read Salman Rushdies Midnights Children.

I'm reading Man in His Time, which is a short story collection by Brian Aldiss. I think I need to start reading a novel in conjunction with it though. I love short stories, but I don't like to read a bunch of them in one sitting. Sometimes they start to blur together and each individual story loses some of it's impact.

I'm just finishing Storm Front by Jim Butcher. I like it, but I have a lot of other things on my "to read" list and I don't think I'm going to try to read the whole series.

I'm not sure what's up next. I have a pile of un-read books here including A Bend in the River, Skippy Dies, The Big Rock Candy Mountain, Wolf Hall, Little Bee, and Frankenstein just for starters.

Regan wrote: "I'm just finishing Storm Front by Jim Butcher. I like it, but I have a lot of other things on my "to read" list and I don't think I'm going to try to read the whole series."

I'm just reading one every couple of months. Eventually I'll get through them all.

The Dresden Files is a series that improves a lot as it goes along, at least in my eyes. I didn't really like the first two, but every subsequent book after that is better than the last. Well, at least until book six, which is the last one I've read. I certainly plan on reading all the others though.

I am going to read The Picture of Dorian Gray and The Winds of War this week.

Well, maybe one of these years I'll read the follow-ups.

I ended up starting The Broken Teaglass which I don't think is turning out to be a very good book. Great plot and dust-jacket blurb. Not so great writing so far.

Right now I'm reading A Prayer for Owen Meany, a book recommended by one of my favorite professors. When I'm done with that, I'm gonna finish The Picture of Dorian Gray for this book club.

I've finished reading The Lucky One by Nicholas Sparks earlier and now I'm starting Seven Up by Janet Evanovich.

I am reading Murder on the Orient Express and enjoying every page of it.

Kimberly that is one of my favorite books! I'm so glad you're enjoying it.

I have Murder on the Orient Express on my bookshelf right in front of me, and I want to get to it sometime this summer. I might be taking the train this summer, so I think I'll wait until after that...

Since I got through reading The Woman in Black so quickly, I decided to try and make a dent in my to be read pile and am reading Wyllard's Weird, sort of a sensationalist novel similar to Wilkie Collins. Also, just found my copy of The Picture of Dorian Gray, so I'll get to that after.

Franky wrote: "I have Murder on the Orient Express on my bookshelf right in front of me, and I want to get to it sometime this summer. I might be taking the train this summer, so I think I'll wait until after tha..."

Franky- how was The Woman in Black? I've been thinking of reading it.

Andrea, The Woman in Black has fairly mixed reviews. Most complaints from reviewers are about its outcome being fairly predictable and some see it as being rather cliche or not scary enough.

I really enjoyed, however, and thought it had some originality. It is a rather short novel (a little over 100 pages) so it won't take long to read and has great creepy and spooky atmosphere, especially when the main character arrives at the house and begins to learn of its history.

Are you a ghost story fan? It is similar to The Little Stranger or The Turn of the Screw.

Thanks Franky. I am a ghost story fan, though they are not my favorite genre. I'm not reading all that many books at the moment so I think I'll give it a try.

I'm half-way through my monthly books so I'm taking a quick break from them and reading The Admiral's Mark.

I am almost finished with The Butterfly Cabinet. It's very good although I don't say excellent. I wish I could say what my next book will be.

Right now I'm reading American Gods and I'm really enjoying it. Only about a third of the way through so far. This morning I finished World War Z: An Oral History of the Zombie War as well, and I liked it a lot! The rest of the month I'm devoting to digging deeper into fantasy (with The Mists of Avalon, The Dragonriders of Pern, and The Windup Girl among others) and getting the ball rolling on studying for the GRE subject test in lit with Walden, or Life in the Woods, Arms and the Man and a bunch more haha.

I've been wanting to get into the Dresden files for a while too, so maybe I'll pick up Storm Front?

I'm currently reading Lone Wolf. I'll also be reading Coraline, The Picture of Dorian Gray, and A Game of Thrones (I never did start this last month) this month.

Yesterday, I finished reading Seven Up by Janet Evanovich and today I've started The Client by John Grisham.

Flowers for Algernon, The Maltese Falcon, The Snow Child,and Sacrilege

Yesterday, I finished The One and Only Ivan- very good YA book. I have been reading The Picture of Dorian Gray on and off for several weeks now, but can't seem to get into it. I have the The Cellist of Sarajevo on my nightstand and will finish that today. Up next is The Hare With Amber Eyes: A Family's Century of Art and Loss. That should take me through mid-June.

Ignoring the fact that I have well over 30 books littered across my bedroom floor...

I will hopefully begin The Picture of Dorian Gray soon -- I'm anxious to read it!

I also have The Grey Album: Music, Shadows, Lies, Half World, The Alchemyst, The Postmortal, and Sea of Shadow planned as June reads.

Shadow and Bone is waiting for me, too -- picking it up as soon as finals are done.

I'm over halfway in Between Shades of Gray and it is wonderful.

I finished everything I was reading and am now reading The Shipping News, The Woman in Black, and The Fault in Our Stars. After hearing from some other Goodreads users I decided not to give up on As I Lay Dying and am still working on it too.

I've finished reading Island of Lost Girls by Jennifer McMahon and now I'm a couple of chapters into Fifty Shades of Grey by E.L. James.

I've finished all my book club books and am now reading Expletive Deleted: A Good Look at Bad Language and Myths and Mysteries of Washington.

(I read Between Shades of Gray last month -- lovely book!)

Finished Shadow & Bone and Half World, and I'm currently reading my way through The Alchemyst. After that I'll start Equal Rites! I was hoping to read The Picture Dorian Gray next, but library due dates, you know.

I just finished my book club books and now I'm about to start Tinker, Tailor, Soldier, Spy so that I can finally watch the movie! Unless my turn in the library queue comes up for Swamplandia!, that is, in which case that takes precedence.

Just finished Fight Club and have now started The The Great Gatsby.

Have finally started A Dance With Dragons

I am reading Flowers for Algernon. I read the short story years ago but had not read the novel. It is very powerful.

I'm reading Capote by Gerald Clarkeand Music for Chameleons by Truman Capote. Yeah, there's a pattern developing here. My June reads have included Capote's Other Voices, Other Rooms, The Grass Harp and A Tree of Night: and Other Stories, and Breakfast at Tiffany's: A Short Novel and Three Stories. Also, in June, I re-read To Kill a Mockingbirdfor the eleventy-seventh time, and Suttree by Cormac McCarthy. It's been a good month. 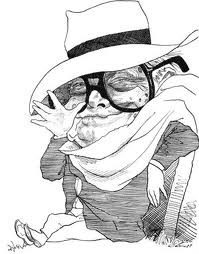 I am reading Till We Have Faces: A Novel of Cupid and Psyche by C. S. Lewis.

I just finished The Fault in Our Stars-(It is wonderful; I simply cannot recommend it highly enough!). I am still working on As I Lay Dying. Now I'm also reading Hamlet, The Talented Mr. Ripley, and re-reading Animal Farm.

Finished Crooked Letter, Crooked Letter and think I'll try 2001: A Space Odyssey next, as it's been sitting on my to read shelf for awhile. I might also read Murder on the Orient Express if I have time this month.