"In Bed" with Hitchhiker Eoin Colfer 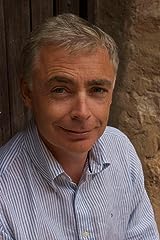 In the beloved science fiction series, The Hitchhiker's Guide to the Galaxy, poor Arthur Dent can't get a break. He's banished to a dangerous and disorienting life of galaxy hopping and can never find a good cup of tea. Author Douglas Adams once remarked that he'd like to pen a sixth book for the perversely named "trilogy," but he died in 2001. Now, 30 years after the original, Irish author Eoin Colfer has stepped in to beleaguer Dent one more time. Colfer is the author of his own droll fantasy, the best-selling Artemis Fowl series. In celebration of Hitchhiker Book 6, And Another Thing..., we asked Colfer to list his top five science fiction books. Curl up with a bottle of that Old Janx Spirit and your trusty towel, and get started.

"When I read this book I realized that sci-fi could be literature. There are no boundaries that we cannot explore or indeed break through. Gibson brought and continues to bring science fiction to the mainstream market. Everybody loves him. Also a helluva storyteller."

"Not a fun read, in fact brimming with unspeakable horror, but genius all the same. Brilliantly written and compelling. By the time you have finished this book, you will know the pilgrims better than you know your own family."

The War of the Worlds by H.G. Wells

"One of the originals and best. A dark tale of alien invasion with a truly unexpected ending. The father of modern sci-fi and a must-read for anyone who calls themselves a fan of the genre."

"First and foremost not a comedy. I read this in college and was depressed for weeks and could not bring myself to trust anyone with a tie. A small, dark, beautiful book without the traditional hero and happy ending structure. Politically prescient and not just for sci-fi fans."

The Postman by David Brin

"A harsh voyage across post-apocalyptic America that somehow manages to sustain a thread of hope."

Sally, maybe it just happens that the books he likes the most are written by male authors. I don't see your point, really. What does the gender of the author have to do with anything?

I'm gonna have to agree with Henrik. It shouldn't matter if the writers are male or female. If Eoin filtered his favorites by sex, then the list wouldn't be genuine, anyway.

Henrik wrote: "Sally, maybe it just happens that the books he likes the most are written by male authors. I don't see your point, really. What does the gender of the author have to do with anything?"

Bet it would seem out of place to you though, if this list was comprised entirely of female authors. Check your double standards.

Lena wrote: "Bet it would seem out of place to you though, if this list was comprised entirely of female authors. Check your double standards."

You maybe right, I guess it would seem out of place if I looked at it from a gender perspective. Do you choose books based on author gender, or other criterias?

I want to point out something I read written by Julie Crisp, Editorial director of Tor UK. " SEXISM IN GENRE PUBLISHING: A PUBLISHER’S PERSPECTIVE "

She points out that only 32% of submitted works to TOR were by women. (22% of science fiction, 57% of urban fantasy)

And this can be found to be true across any number of publishing houses that specialize in Science Fiction and Fantasy. And even more true as you look back into the past...those numbers have increased in the last couple of decades, significantly.

Are there FANTASTIC Scifi/Fantasy novels by women? Absolutely! The Pern novels were right up there with The Lord of The Rings and Heinlein novels for me, growing up. Mercedes Lackey was my introduction to Urban Fantasy (and she's a odd one to list...she does urban fantasy other forms of Fantasy, not Science fiction), But they are, numerically, in the minority by a very large margin.

To give someone a hard time because, on a list of five books out of the, quite likely, thousands he's read in his lifetime, none of them were written by women is just...sad.

Umm stop with the gender stuff. I have read a lot of book written by women. I think I have read more books written by women than by men. Oddly the best books I have read usually are written by men but I have also read some really awful books written by men as well. I will say if we are going to argue gender that on average women write better books, just not usually the best. Women can't seem to not include a love triangle as a major plot element.
1. Neuromancer - first cyber punk book ever - deserves to be on everyone's sf list
2. Hyperion - classic alien book
3. War of the Worlds - classic alien invasion book - not the best written but the creator of the subgenre in most people's eyes
4. 1984 - one of the first dystopian books written
5. Postman- classic book about the fall of civilization and its rebuilding - fight the militias
These are all safe choices. Most female sci-fi writers would probably have to include them on their list too. Stop your whining.