Dark Sentinel Excerpt From Chapter 4 ... The Creation of a Hero: Andor Katona

The Last Hope for The Ancients

High up in the Carpathian Mountains is a monastery hidden away called the Retreat in the Veil of Mists. Until recently, this monastery was the last refuge for those ancient Carpathian warriors who hoped to keep humanity safe by locking themselves away and working to keep the darkness at bay.

These warriors are men of honor, suffering and in despair. They didn’t feel suicide was right and so they sought the company of others like themselves, looking for both sanctuary and camaraderie. Though, without the hope of ever finding a lifemate it was a lonely existence.

But, the outside world slipped in, in Dark Ghost, when Fane introduces himself as keeper of the monastery to Teagan and offers his assistance as well as the assistance of the warriors within the monastery. We learn much more about the monastery and its inhabitants in Dark Promises when Gabrielle follows Gary and finds, in a very horrible way, that Aleksei, one of the monk warriors, is her lifemate. Aleksei brings Gabrielle inside the monastery as he determines her fate, and his own. It is here in Dark Promises that two modern women are found to be lifemates; Gabrielle and Aleksei and then Trixie and Fane. The ancients can see for themselves that there’s hope out in the world now that they know psychic women can be lifemates.

With the ancients now aware that human women can be lifemates many of them join Tariq Asenguard in Southern California where he has set up a compound and monitors vampire activity, something that soon becomes an all-out war. More ancients join as the battle continues and we find in Dark Carousel that Tarqi has been chosen by Mikhail, the Prince, to represent him in the United States. 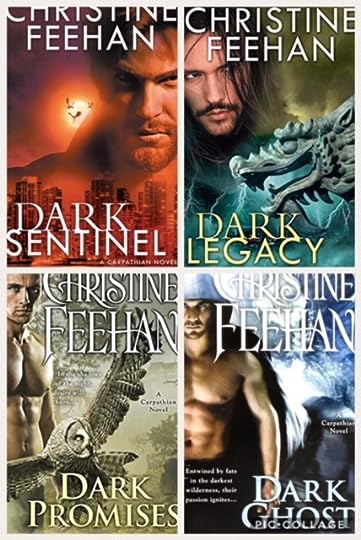 In Dark Legacy we discover that the vampires have a plan and are strategically working toward carrying out that plan, which includes killing Tariq and everyone who is helping him. Dark Legacy has a lot of action as the battle begins to spread and a huge twist leaves the danger growing more than the Carpathians realize. Dark Legacy also has some surprises that readers will be excited about and this revelation will reverberate throughout the next several books.

Dark Sentinel brings the New Guard together in a new way. And, we’re re-introduced to the human society of vampire hunters that have joined in the fray. Andor, one of the ancient warriors, is attacked on several fronts leaving him to die, which he is ready for. In order to save him it will take his lifemate and the New Guard of ancient warriors to ban together along with Gary Daratrazanoff, a great and powerful healer. But, they have to completely trust in each other, because there’s only one way to save Andor, and it’s never been tried before. If something goes wrong, some, or all even all of them, could die.

These ancients have suffered a long time and finally have a shot at finding a lifemate. They have hope for the first time in centuries. They just have to hold out a little longer. Be strong. Don’t give up.

Can hardly wait to read Dark Legacy, and read much more about the Ancients. Have a great day.

OMG OMG OMG! I think that is a good discription of how blown my mind is Christine Feehan! Can't wait to get my hands on your latest BOOK 😈

Awesome and brillant direction the carpathians are taking! Loving it! Im thinking both halves of the souls have been through a lot. So looking forward, with lots of hope, for each lifemate pair to find each other!

I think we are looking at a similar relationship like Zacharias and his lifemate, when they are together he sees colors and has emotions etc. Apart the darkness creeps in bringing him close to the DARK Ness

Loving the direction this series is taking. Can't wait to see more ancients find their lifemates.

I can't wait for this to come out!

I love that there are more men (ancients) to match up.

Janice wrote: "Can hardly wait to read Dark Legacy, and read much more about the Ancients. Have a great day."

I hope you enjoy it, Janice!

Jamilynn wrote: "OMG OMG OMG! I think that is a good discription of how blown my mind is Christine Feehan! Can't wait to get my hands on your latest BOOK 😈"

So glad you enjoyed the blog!

Maureen wrote: "Awesome and brillant direction the carpathians are taking! Loving it! Im thinking both halves of the souls have been through a lot. So looking forward, with lots of hope, for each lifemate pair to ..."

I really am enjoying the new direction and am so glad to hear readers are too!

I know I will. Counting the weeks. Have a great day.

Please tell me your going to write a story about Sandu!

I enjoyed Dark Sentinel. Can"t wait for the next dark series We learn about Elisabeta & Ferro are life mates also Jalija was coming back before Elisabeta comes out of the ground. You Christine are A great story writer.Thank U

Diane wrote: "I enjoyed Dark Sentinel. Can"t wait for the next dark series We learn about Elisabeta & Ferro are life mates also Jalija was coming back before Elisabeta comes out of the ground. You Christine are ..."

Loved both Elisabeta, and Jalija. Can hardly wait to read more about them.