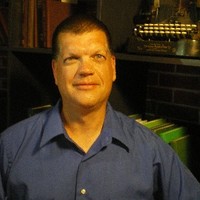 Milo Swanton started writing stories as soon as he could write (second grade). His first big purchase from his paper route money was an electric typewriter.

Milo enjoys epic stories with intricate plots and lots of characters. He wrote his first novel during college after watching the epic movie El Cid and wanting to write something like it. A rewrite of this novel, Imperial Swords, is a possible sequel to Fealty to the King.

Milo grew up in Wisconsin and earned a bachelor's degree in computer science and mathematics. His software engineering career included work on military, medical device, and air traffic control applications. He lives with his wife and three teenage daughters in Minnesota.

If you could travel to any fictional book world, where would you go and what would you do there?
Milo Swanton I would go to Narnia during the reigns of the four kings and queens, tour the country, spend time at Cair Paravel, and go on the trip to Tashbaan.
flag
How do you deal with writer’s block?
Milo Swanton I do something else and wait for it to end.
flag
See all 7 answers from Milo Swanton…

I used historical parallels regarding languages. A mother language, Iriack, spawned others just as Italian, Spanish, and Portuguese came from Latin. The Snarshyimt speak a language with a different root. They brought down an empire just as Germanic tribes brought down the Roman Empire, and they drink beer! Jorgis the Hojyim invented an alphabet for the Snarshyim language as St. Cyril did for the R Read more of this blog post »
Like  •  0 comments  •  flag

I have never wrote a book review before hopefully I will do ok. Fealty to the King is an awesome book. I know it has what it takes to have thousands of people read it and like it. I have many one liners that I like. I am quoting Sir Grebnar " I prefer black!" I just love saying it. Another is when a crowd is chanting "boldness, boldness, boldness" they were referring to Sir Grebnar and that was when he realized he had a problem. Thirdly Lady Gernthol and Vinlon eyes locked on each other for the first time in years, in a packed large crowd that parted for it to happen and Gernthol said "Will you declare fealty to the King?" Vinlon turned to King Brutez and YELLED " I wont!" Hey Milo Swanton how did I do?