,
Discover new books on Goodreads
See if your friends have read any of Giada De Laurentiis's books 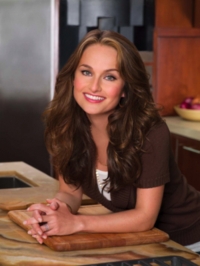 Giada De Laurentiis isn't a Goodreads Author (yet), but they do have a blog, so here are some recent posts imported from their feed.

"It is a shame a media outlet such as Star needs to rely on disgraceful lies and hide behind false anonymous "sources" in order to entertain their readers. When the Star reporter approached Giada De Laurentiis on Sunday, while she was co-hosting a children's

4.07 avg rating — 963 ratings
Quotes by Giada De Laurentiis  (?)
Quotes are added by the Goodreads community and are not verified by Goodreads. (Learn more)
“You just need a little perspective. Warmed chocolate can give you that.”
― Giada De Laurentiis, Paris!
tags: hot-chocolate
9 likes
Like

“Parisians take their work quite seriously, but they take their enjoyment of the little moments just as seriously. Sometimes sitting in a café with close friends or family and enjoying a shared plate of macarons is just as important as sitting in an office working. You know, some Parisians start their morning with a mug of hot chocolate.
Really? Emilia asked, taking a fourth and fifth sip.
The chocolate is like medicine to take away your troubles and help you see that life is sweet.”
― Giada De Laurentiis, Paris!
tags: hot-chocolate, paris
8 likes
Like

“It's pronounced wee but spelled O-U-I. It's all you'll want to say when you're sitting at one of the thousands of little cafes that line the streets and you're looking at a menu full of foods you just want to eat for days. And then you wake up early, and the sun is rising in shades of pink over the white buildings as you make your way through the sleepy streets until you're upon the fresh markets!”
― Giada De Laurentiis, Paris!
tags: paris
3 likes
Like

Is this you? Let us know. If not, help out and invite Giada to Goodreads.