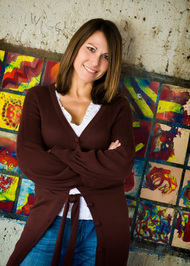 2,365 books | 359 friends
Friend details
Online
"Elissa's a YA librarian and Amy's a YA author."
More friends…

I'm so tired. Been doing tons of radio interviews. Need to get to sleep now . . .

“She can paint a pretty picture but this story has a twist. The paintbrush is a razor and the canvas is her wrist.”
― Amy Efaw, After
tags: depressing, emo
332 likes
Like

“In case you didn't know, dead people don't bleed. If you can bleed-see it, feel it-then you know you're alive. It's irrefutable, undeniable proof. Sometimes I just need a little reminder.”
― Amy Efaw, After
tags: cutting, self-harm
330 likes
Like

“Just because you don't say much doesn't mean people don't notice you. It's actually the quiet ones who often draw the most attention. There's this constant whirlwind of motion and sound all around, and then there's the quiet one, the eye of the storm.”
― Amy Efaw, After
tags: quiet, shy
252 likes
Like

What randomly selected book would you like to read in February?

David Klass
author of
You Don't...

Hey Amy...Thanks for accepting my friend request. I've ordered "After", and I cannot wait to read it. It sounds like a really great book.

I'll be posting a review soon as well :)"

Yep, that's it. You "got" it. Characters have to grow in novels. They have to be different at the end than they were at the beginning, for better or for worse. If Devon started out in denial, she really has only one, satisfying place to go by the end -- acceptance. She has to work her way out of her denial and accept what she did. And that doesn't always mean a "happy ending" immediately. As The Fray say in their song, "All At Once": "Sometimes the hardest thing and the right thing are the same." It's not only the right thing for Devon to do morally, but the right thing for Devon to do personally. Her particular personality would not have let herself "off the hook" and move on with her life. She would not have been a whole person if she had, and she may not have ever gotten over it. At least, that's my take on the character! Often there's something "freeing" about owning what we do.

I understand when readers don't "get it" though, but at the same time I don't get how they can miss it (something so obvious). I guess they think that by pleading guilty, she'll go to jail for the rest of her life or something? But that's just not the case; I think it's a misunderstanding of how the legal system works. What happens next is that she just has to skip the part of the trial where the prosecutor has to prove that she attempted to kill her baby. By pleading guilty, she doesn't have to go through all that (which would be excruciating to sit through, btw, only to be found guilty at the end, anyway. Because the legal argument that Dom was thinking of launching really wouldn't have flown. Good try, and attorneys have to do what they can, but the argument would not have been persuasive.) So, by pleading guilty, all Devon has to sit through is the sentencing phase of the trial; she's already admitted that she's guilty so they don't have to prove that. (And had she plead not guilty and then was proved guilty in the trial, she still would've had to sit through the sentencing phase). Sentencing would be similar to what she already went through -- people talking about what a good kid she was and her high potential for rehabilitation. And the judge would more than likely think highly of her for stepping up and taking responsibility, and then give her a lighter (if any) sentence. People forget that sometimes, even if someone is found guilty of a crime, the sentence can be no jail time, especially in cases like this (young girl with no support system and etc.).

The other thing that readers want to happen in the book, I think, is some kind of reconciliation between Devon and her baby or Devon and Connor. And so . . . that's what the second book is for! I didn't want to get all distracted and tangled up in that part of the story with AFTER. AFTER was not about the baby and not about the boy or anyone else. AFTER was Devon's story, her journey toward clarity and acceptance when she had been so fogged and in denial at first.

Anyway, I am looking forward to your blog review if you do it! Thanks for promoting AFTER on it!

Thanks so much, Dija, for the nice msg. Let me know what you think when you're done (about half don't "get" the ending, not to spoil this for you!)

Yeah, I really did want people to be left with something to think about and discuss. I'm working on a sequel/spin off of AFTER now . . . starting a new book is always so hard (and scary). Keep your finger's crossed I can do it!

Thank-you for accepting my friend request, Amy.
I would also like to thank you for reading my review of your book and commenting so nicely.