Discover new books on Goodreads
See if your friends have read any of S.M. Stirling's books 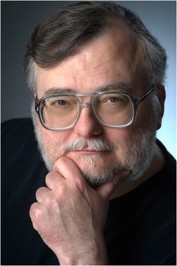 I’m a writer by trade, born in France but Canadian by origin and American by naturalization, living in New Mexico at present. My hobbies are mostly related to the craft? I love history, anthropology and archaeology, and am interested in the sciences. The martial arts are my main physical hobby.

The Change (Emberverse I) (3 books)
by
S.M. Stirling

Island in the Sea of Time (3 books)
by
S.M. Stirling

“There is a technical term for someone who confuses the opinions of a character in a book with those of the author. That term is idiot.”
― S. M. Stirling
701 likes
Like

“Now let's move on to the subject of how a real man treats his wife. A real man doesn't slap even a ten-dollar hooker around, if he's got any self respect, much less hurt his own woman. Much less ten times over the mother of his kids. A real man busts his ass to feed his family, fights for them if he has to, dies for them if he has to. And he treats his wife with respect every day of his life, treats her like a queen - the queen of the home she makes for their children.”
― S.M. Stirling, Dies the Fire
tags: dies-the-fire, domestic-violence, emberverse, stirling
123 likes
Like

“And the first king was a lucky soldier.”
― S.M. Stirling, Dies the Fire
21 likes
Like

OCTOBER SF: The top 2 from this poll will move on to the run-off poll for October Science Fiction Book of the Month!

Is this you? Let us know. If not, help out and invite S.M. to Goodreads.