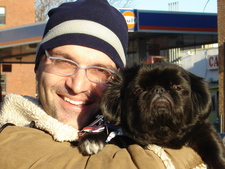 This will prevent David Jay from sending you messages, friend request or from viewing your profile. They will not be notified. Comments on discussion boards from them will be hidden by default.
Sign in to Goodreads to learn more about David Jay.

David Jay is currently reading
Howards End is on the Landing: A Year of Reading from Home
by Susan Hill
bookshelves: currently-reading

“You don’t have a right to the cards you believe you should have been dealt with. You have an obligation to play the hell out of the ones you’re holding and my dear one, you and I have been granted a mighty generous one.”
― Cheryl Strayed, Tiny Beautiful Things: Advice on Love and Life from Dear Sugar
221 likes

“I knew that if I allowed fear to overtake me, my journey was doomed. Fear, to a great extent, is born of a story we tell ourselves, and so I chose to tell myself a different story from the one women are told. I decided I was safe. I was strong. I was brave. Nothing could vanquish me.”
― Cheryl Strayed, Wild: From Lost to Found on the Pacific Crest Trail
760 likes

“The thing about hiking the Pacific Crest Trail, the thing that was so profound to me that summer—and yet also, like most things, so very simple—was how few choices I had and how often I had to do the thing I least wanted to do. How there was no escape or denial. No numbing it down with a martini or covering it up with a roll in the hay. As I clung to the chaparral that day, attempting to patch up my bleeding finger, terrified by every sound that the bull was coming back, I considered my options. There were only two and they were essentially the same. I could go back in the direction I had come from, or I could go forward in the direction I intended to go.”
― Cheryl Strayed, Wild: From Lost to Found on the Pacific Crest Trail
149 likes

Josh Kilmer-Purcell
author of: I Am Not Myself These Days
More…

Polls voted on by David Jay