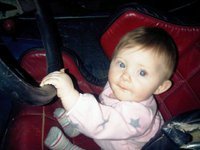 This will prevent Pam from sending you messages, friend request or from viewing your profile. They will not be notified. Comments on discussion boards from them will be hidden by default.
Sign in to Goodreads to learn more about Pam.

The Perfect Dress by Carolyn Brown
1 highlight
“Honey, that girl might be an angel, but if she is, it’s because she’s done had the hell screwed out of her.”

“This is the moment I have dreaded, the very reason why we kept running, even when it seemed hopeless. We all seemed to believe if we kept running, we would never die. But what exactly had we been hoping to find in the end? A magical place where the infection hadn't spread? A castle surrounded by gumdrops and cotton candy?”
― Jen Naumann, The Day Zombies Ruined My Perfectly Boring Life
tags: humor, paranormal, zombies
2 likes

“Yeah, okay. You're right. I was having dinner with Zombie Carl the other night. You know, steak, rare, and a bottle of vintage type A. He told me all his secrets, but too bad for you I promised him I wouldn't tell. In exchange I asked him to gather his best undead buddies and stalk me through my friend's yard. And oh, yeah, it was totally fine if they wanted to use me as an all-night-dinner buffet, because having organs is SO last year.”
― Gena Showalter, Alice in Zombieland
tags: alice-in-zombieland, funny, zombies
188 likes

“What makes us the strongest tribe on the continent is the fact that a group that opposes these values--a group that would have mankind remain in the new dark ages--is permitted to grow, permitted to exist...and, after it becomes a violent terrorist organization, is allowed to live on it own lands, taken out of the lands of those it has attacked and continues to attack!" He had to stop speaking then--the applause was louder than even his amplified voice. "They expect that fear will drive us to become like them...closed-minded, blind, angry. Our society will remain open and free so long as I am standing upright," he continued, once the applause died down.”
― Lia Habel, Dearly, Departed
tags: dystopia, steampunk, zombies
5 likes

“Blood might be thicker than water, but love was the most powerful magic of all.”
― Lucy Connors, The Lonesome Young
tags: mickey-rhodale, romance, victoria-whitfield, young-adult, young-adult-romance
16 likes

“This is Lonesome Ridge, so we’d be the lonesome young,” I pointed out. “Sounds like a song.”
“Sounds like a heartache,” he said, tightening his arms around me and resting his cheek on the top of my heard. “I don’t want to be lonesome. I want to be with you.”
― Lucy Connors, The Lonesome Young
tags: mickey-rhodale, romance, victoria-whitfield, young-adult, young-adult-romance
3 likes

When Friends Fall In Love

Polls voted on by Pam