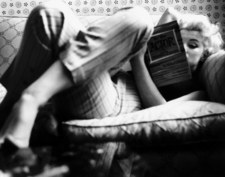 This will prevent Roberta from sending you messages, friend request or from viewing your profile. They will not be notified. Comments on discussion boards from them will be hidden by default.
Sign in to Goodreads to learn more about Roberta.

“-You've got a . . . Lot of books, he said at last.
-it's a sickness.
-Are you . . . Seeing anyone for it?
-I'm afraid it's untreatable.
-is this the . . . Dewey decimal system?
-No. But it's based on similar principles. Those are the British novelists. The French are in the kitchen. Homer, Virgil, and the other epics are by the tub.
-I take it the . . . Transcendental its do better in the sunlight.
-Exactly.
-Do they need much water?
-Not as much as you think. But lots of pruning.
He pointed the volume toward a pile of books under my bed.
-And the . . . Mushrooms?
-The Russians.
-Ah.
-Who's winning?
-Not me.”
― Amor Towles, Rules of Civility

“Everyone you will ever meet knows something you don't.”
― Bill Nye
3912 likes

“It's amazing how a little tomorrow can make up for a whole lot of yesterday.”
― John Guare, Landscape of the Body
tags: future, hope
3561 likes

Best Books To Read In Autumn

What's the Book You Can't Wait to Read This Summer?

Polls voted on by Roberta