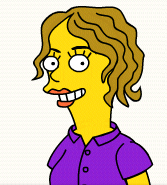 This will prevent Tamra from sending you messages, friend request or from viewing your profile. They will not be notified. Comments on discussion boards from them will be hidden by default.
Sign in to Goodreads to learn more about Tamra.

Tamra is currently reading
Culture Warlords: My Journey Into the Dark Web of White Supremacy
by Talia Lavin
bookshelves: currently-reading

See all 6 books that Tamra is reading…

“The cradle rocks above an abyss, and common sense tells us that our existence is but a brief crack of light between two eternities of darkness.”
― Vladimir Nabokov
tags: common-sense, life, reality
198 likes

“All saints should be judged guilty until proven innocent.”
― George Orwell
16 likes

“I believe that there is an equality to all humanity. We all suck.”
― Bill Hicks
tags: humor, humour, misanthropy, perspective
468 likes

“What naive garbage. People don't want freedom anymore--even those to whom freedom is a kind of religion are afraid of it, like trembling acolytes who make sacrifices to some pagan god. People want their governments to keep secrets from them. They want the hand of law to be brutal. They are so terrified by their own power that they will vote to have it taken out of their hands. Look at America. Look at the sharia states. Freedom is a dead philosophy, Alif. The world is returning to its natural state, to the rule of the weak by the strong. Young as you are, it's you who are out of touch, not me.”
― G. Willow Wilson, Alif the Unseen
tags: democracy, dictatorships, freedom, government, power
5 likes

“If we are to survive, we must have ideas, vision, and courage. These things are rarely produced by committees. Everything that matters in our intellectual and moral life begins with an individual confronting his own mind and conscience in a room by himself.”
― Arthur M. Schlesinger Jr.
25 likes

Banned Books — 4379 members — last activity 2 hours, 23 min ago
To celebrate our love of reading books that people see fit to ban throughout the world. We abhor censorship and promote freedom of speech.

Brian Wood
author of: DMZ, Vol. 1: On the Ground
More…


Polls voted on by Tamra