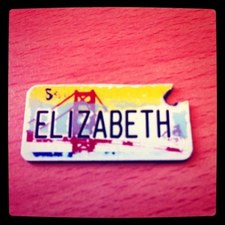 This will prevent Lizzy from sending you messages, friend request or from viewing your profile. They will not be notified. Comments on discussion boards from them will be hidden by default.
Sign in to Goodreads to learn more about Lizzy.

“Darcy: 'I certainly have not the talent which some people possess, of conversing easily with those I have never seen before. I cannot catch their tone of conversation, or appear interested in their concerns, as I often see done.'

Elizabeth:'My fingers do not move over this instrument in the masterly manner which I see so many women's do. They have not the same force or rapidity, and do not produce the same expression. But then I have always supposed it to be my own fault -- because I would not take the trouble of practicing. It is not that I do not believe my fingers as capable as any other woman's of superior execution.”
― Jane Austen, Pride and Prejudice

“because nerds like us are allowed to be unironically enthusiastic about stuff. Nerds are allowed to love stuff, like jump-up-and-down-in-the-chair-can’t-control-yourself love it. Hank, when people call people nerds, mostly what they’re saying is ‘you like stuff.’ Which is just not a good insult at all. Like, ‘you are too enthusiastic about the miracle of human consciousness’.”
― John Green
tags: nerdfighters
5700 likes

“Nothing is more interesting than repressed emotion. The appearance of sardonic coldness and stoicism which has deceived you is but a hollow mockery; beneath it I secrete a maelstrom of impassioned feeling and a mausoleum of blighted hopes.”
― Frances Hodgson Burnett, Through One Administration
2 likes

“I might have known,” said Eeyore. “After all, one can’t complain. I have my friends. Somebody spoke to me only yesterday. And was it last week or the week before that Rabbit bumped into me and said ‘Bother!’. The Social Round. Always something going on.”
― A.A. Milne, Winnie-the-Pooh
tags: eeyore, friends, humor, pooh, winnie-the-pooh
347 likes

Polls voted on by Lizzy