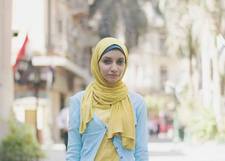 This will prevent إسراء مقيدم from sending you messages, friend request or from viewing your profile. They will not be notified. Comments on discussion boards from them will be hidden by default.
Sign in to Goodreads to learn more about إسراء مقيدم.

“You will see, as time goes by", said Ibn Rushd, "that in the end it will be religion that will make men turn away from God. The godly are God's worst advocates.”
― Salman Rushdie, Two Years Eight Months and Twenty-Eight Nights
22 likes

“We were all trapped in stories, she said, just as he used to say, his wavy hair, his naughty smile, his beautiful mind, each of us the prisoner of our own solipsistic narrative, each family the captive of the family story, each community locked within its own tale of itself, each people the victims of their own versions of history, and there were parts of the world where the narratives collided and went to war, where there were two or more incompatible stories fighting for space on, to speak, the same page.”
― Salman Rushdie, Two Years Eight Months and Twenty-Eight Nights
17 likes