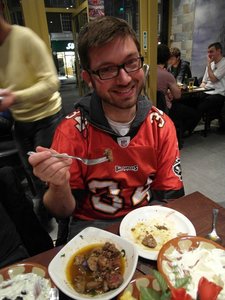 This will prevent Conrad from sending you messages, friend request or from viewing your profile. They will not be notified. Comments on discussion boards from them will be hidden by default.
Sign in to Goodreads to learn more about Conrad.

See all 4 books that Conrad is reading…

“Politics is a strong and slow boring of hard boards. It takes both passion and perspective. Certainly all historical experience confirms the truth - that man would not have attained the possible unless time and again he had reached out for the impossible. But to do that a man must be a leader, and not only a leader but a hero as well, in a very sober sense of the word. And even those who are neither leaders nor heroes must arm themselves with that steadfastness of heart which can brave even the crumbling of all hopes. This is necessary right now, or else men will not be able to attain even that which is possible today.”
― Max Weber
tags: politics
106 likes

“The rest of us, not chosen for enlightenment, left on the outside of Earth, at the mercy of a Gravity we have only begun to learn how to detect and measure, must go on blundering inside our front-brain faith in Kute Korrespondences, hoping that for each psi-synthetic taken from Earth's soul there is a molecule, secular, more or less ordinary and named, over here - kicking endlessly among the plastic trivia, finding in each Deeper Significance and trying to string them all together like terms of a power series hoping to zero in on the tremendous and secret Function whose name, like the permuted names of God, cannot be spoken... plastic saxophone reed sounds of unnatural timbre, shampoo bottle ego-image, Cracker Jack prize one-shot amusement, home appliance casing fairing for winds of cognition, baby bottles tranquilization, meat packages disguise of slaughter, dry-cleaning bags infant strangulation, garden hoses feeding endlessly the desert... but to bring them together, in their slick persistence and our preterition... to make sense out of, to find the meanest sharp sliver of truth in so much replication, so much waste... [Gravity's Rainbow, p. 590]”
― Thomas Pynchon
39 likes

“But when you talk about Nabokov and Coover, you’re talking about real geniuses, the writers who weathered real shock and invented this stuff in contemporary fiction. But after the pioneers always come the crank turners, the little gray people who take the machines others have built and just turn the crank, and little pellets of metafiction come out the other end. The crank-turners capitalize for a while on sheer fashion, and they get their plaudits and grants and buy their IRAs and retire to the Hamptons well out of range of the eventual blast radius. There are some interesting parallels between postmodern crank-turners and what’s happened since post-structural theory took off here in the U.S., why there’s such a big backlash against post-structuralism going on now. It’s the crank-turners fault. I think the crank-turners replaced the critic as the real angel of death as far as literary movements are concerned, now. You get some bona fide artists who come along and really divide by zero and weather some serious shit-storms of shock and ridicule in order to promulgate some really important ideas. Once they triumph, though, and their ideas become legitimate and accepted, the crank-turners and wannabes come running to the machine, and out pour the gray pellets and now the whole thing’s become a hollow form, just another institution of fashion. Take a look at some of the critical-theory Ph.D. dissertations being written now. They’re like de Man and Foucault in the mouth of a dull child. Academia and commercial culture have somehow become these gigantic mechanisms of commodification that drain the weight and color out of even the most radical new advances. It’s a surreal inversion of the death-by-neglect that used to kill off prescient art. Now prescient art suffers death-by acceptance. We love things to death, now. Then we retire to the Hamptons.”
― David Foster Wallace
86 likes

“Come, come, whoever you are. Wanderer, worshiper, lover of leaving. It doesn't matter. Ours is not a caravan of despair. come, even if you have broken your vows a thousand times. Come, yet again , come , come.”
― Jelaluddin Rumi
1197 likes

Literary Prizes — 266 members — last activity Jul 08, 2012 07:00AM
A place to discuss the Booker, the Pulitzer, the Nobel Prize for Literature, the Newbery, and/or any other literary awards.

Polls voted on by Conrad